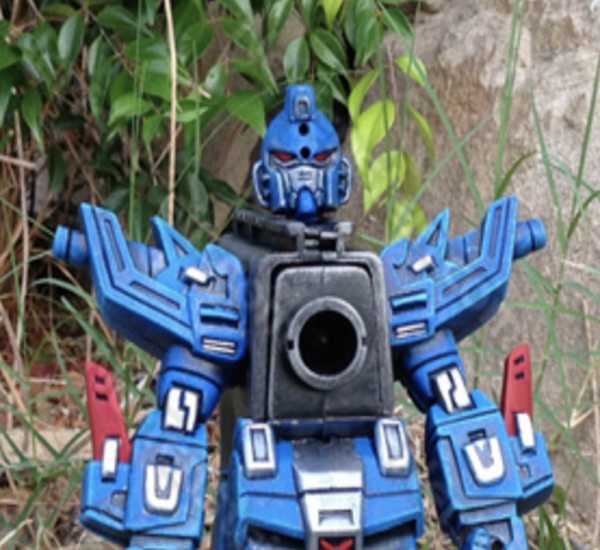 Character / Vehicle Blaster Mods – When is a blaster not a blaster?

Why not think outside of the blaster box

One of the first Nerf mods I did that featured a ‘character’ was Mav2D2, a Nerf Maverick / R2D2 mod. The character was already hidden within the blaster, I just happened to see when I turned the blaster on its end. I personally think finding the hidden in the blaster mod can be as satisfying and doing the mod itself. Thinking outside the box when Nerf / blaster modding is a lot of fun and can lead to some strange results. I thought I’d cover a few of the more strange blaster and Nerf mods I’ve done over the past couple of years for those who might be new to my Nerfenstein Facebook Page or blog (no one likes scrolling back years now do they!).

First up let’s take a look at Mav2D2 the Nerf Maverick R2D2 mod. As you can see the shape was already there. I wrote this up as a tutorial for anyone who wanted to give it a try themselves.

Next up, time for a Nerf Rayven CS-18 Train mod! Choo Choo! Take a look, tell me the Nerf Rayven doesn’t look like a train? The ammo clip was done as tracks. 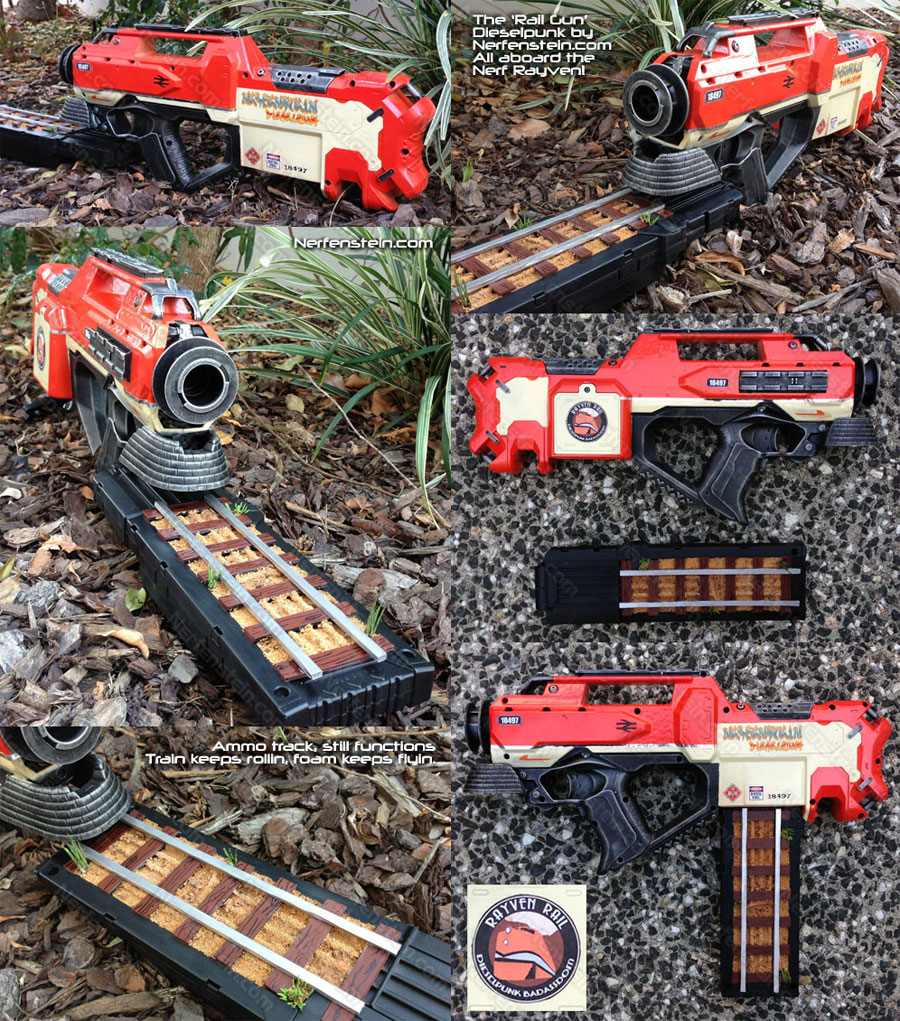 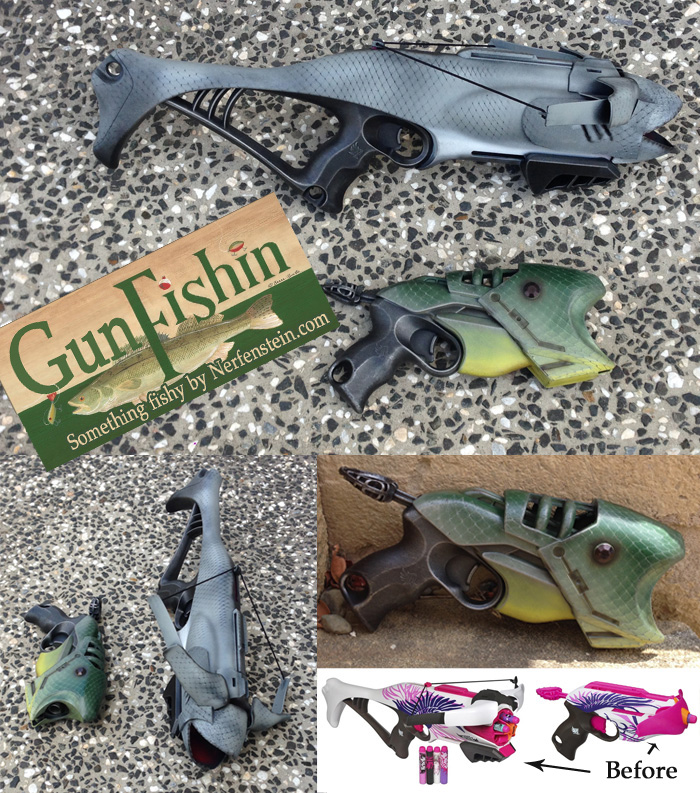 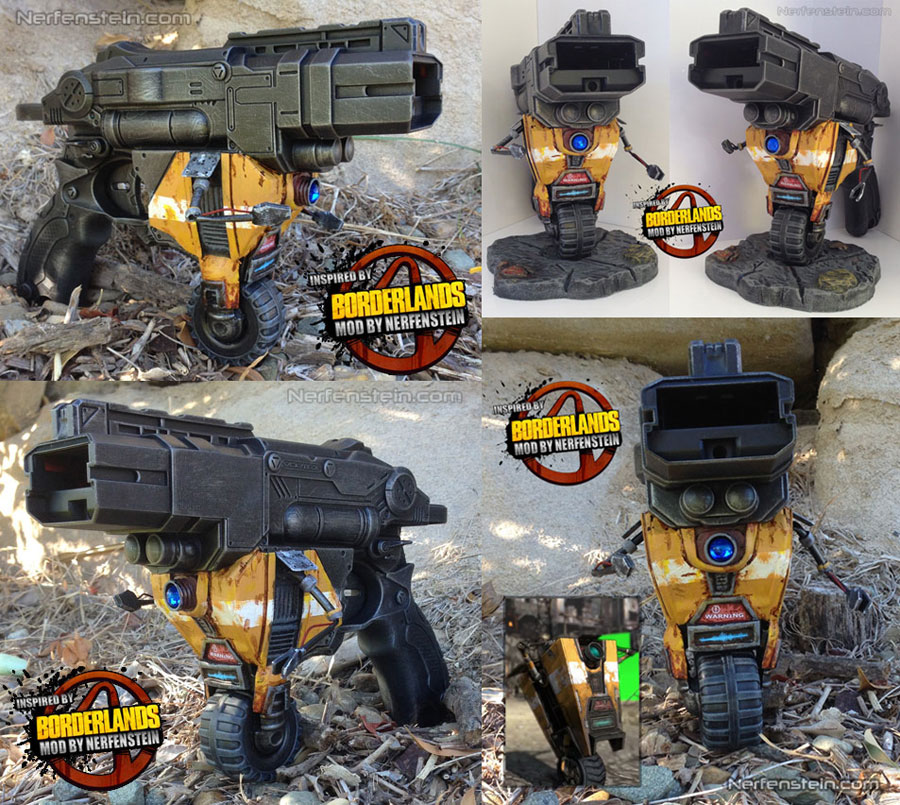 Does it need to be a character or vehicle? Not always. Here’s the Nerf Rayven guitar mod I did in 2013, it turned out pretty cool. It didn’t play, but did still fire and had real strings. 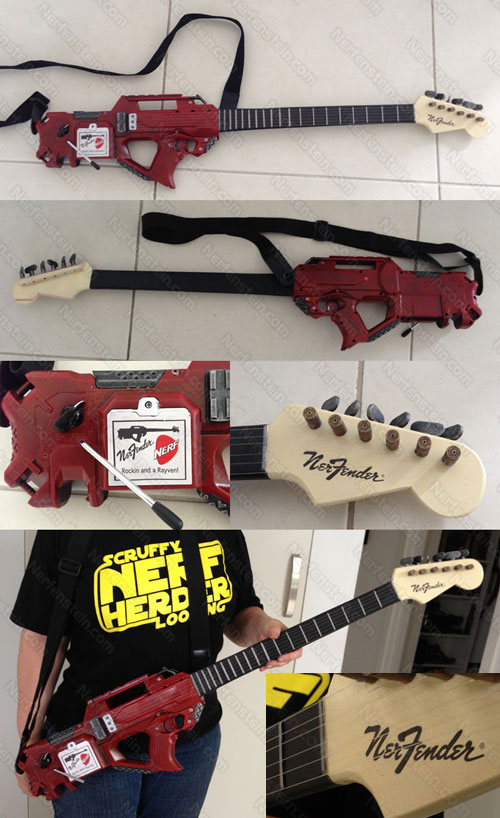 Robots seem to be a thing with me, though this next one wasn’t hidden inside, so much as it was added. Making the dart exit the chest piece to a Transformers style robot? Yes please! Oh and it stands on your shelf looking badass. I left the blaster all the one color, like those puppet theaters where the puppeteer wears all black so the puppet stands out. 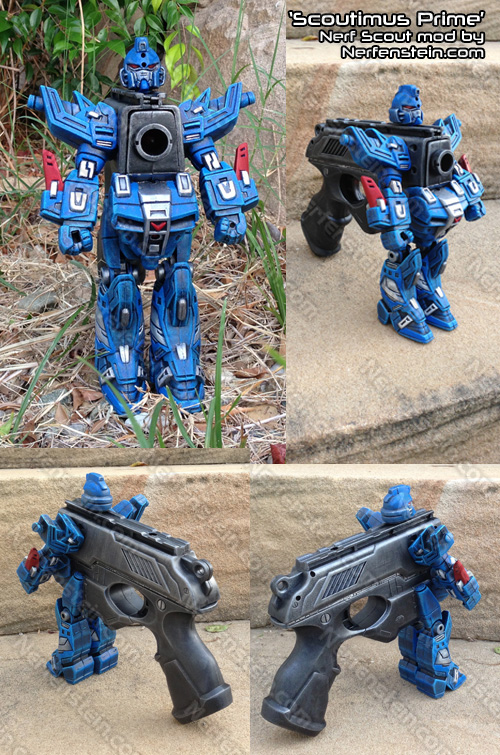 One of the earliest blaster mods I did was a Buzz Bee Single Tek into a HR Giger style Alien. The shape of that iconic dome head was – once again – already there. A sweet gloss coat over the top of the black to green shading and boom. Not one of my favorites for neatness, but I was just a beginner. 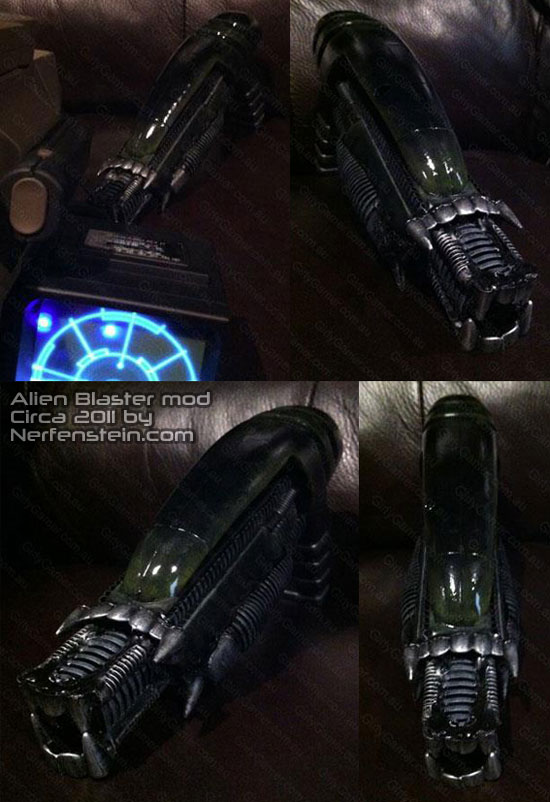 As a huge fan of the movie “Aliens” a few mods spring up with a certain theme, here’s a Nerf Vigilon modded into a spaceship, the cargo vessel “Ripley’s Hope”. The Nerf Vigilon just looks like a spaceship, don’t you think? The cool thing about this mod? It stands on your display shelf on its own landing gear. It also has armament turrets on top, gunzzz on gunzzz. 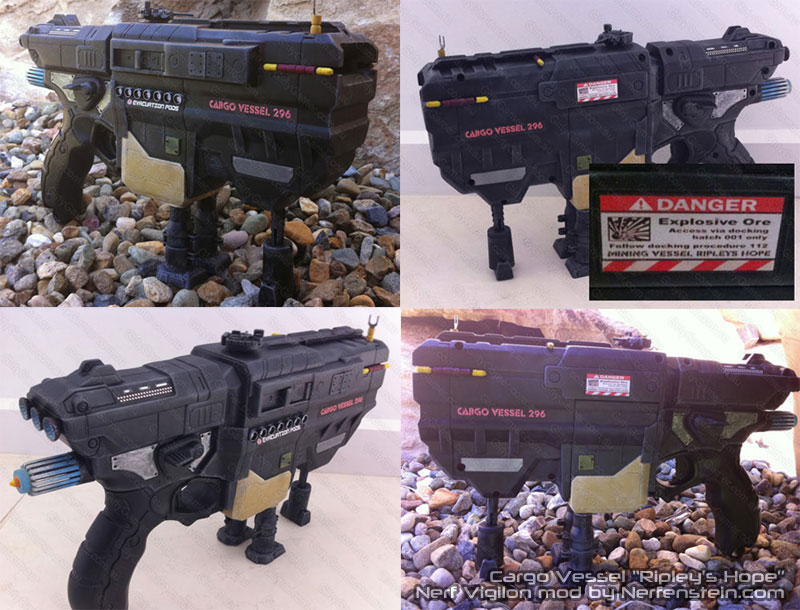 Mass Effect cast? This was a huge multi mod I did and when finished I actually wished I hadn’t bothered, mainly because I hated it, but live and learn. Here’s the main characters from video game Mass Effect as Nerf mods. This mod teaches us that not all wacky modding ideas are good ideas lol.

Achtung Panda! This mod was another ‘vehicle’ mod, but just in paint scheme. Based on the infamous Panzer Tank Division 10 I put a comedy twist on an otherwise serious subject. This remains one of my favorite mods, which is odd as it’s relatively straightforward. I think because of all the hidden detail I did, Rommel’s signature, the Panzer logo in the Panda’s face, a lot of photoshop stuff to bring out the humor. 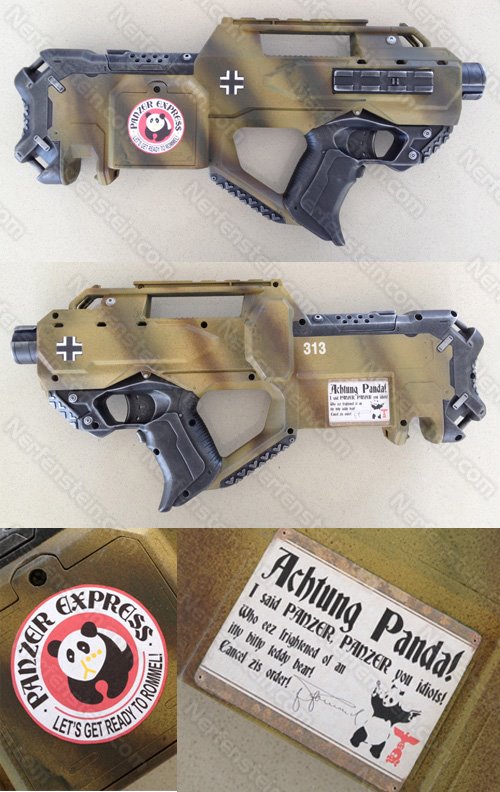 That’s just some of the ‘character’ mods I’ve done in the last few years, vehicles, robot / droids, spaceships, fish and even a guitar. I hope this shows that you don’t always need to mod your Nerf to look like a ‘gun’. Sometimes injecting some character into the Nerf / blaster is more fun.

2 thoughts on “Character / Vehicle Blaster Mods – When is a blaster not a blaster?”