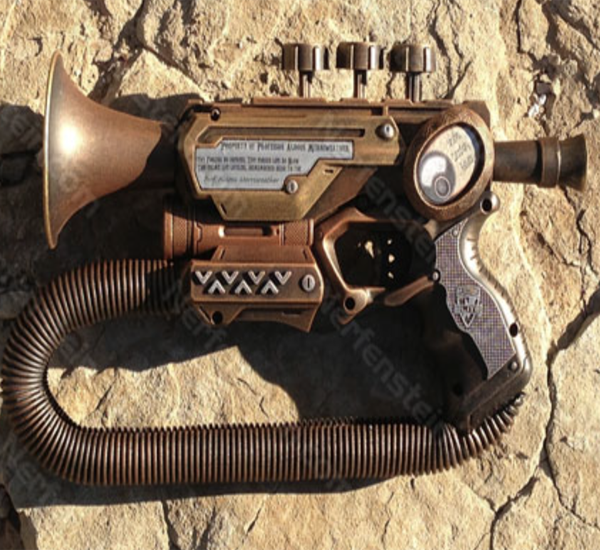 Nerf modding music to my ears!

My good friend Spencer over at Landgrave Customs is presently running a competition called the Rock On Contest. The idea is entrants do a Nerf mod that is music related in some way, he was inspired by my NerFender electric guitar mod. Anyway I decided it sounded like fun, despite having recently done said guitar and this is the result, the Nerf Firestrike Steampunk Trumpet aka The ‘Neutrino Cacophony Radiator’.

The idea came to me via British artist Kate Bush. I am a HUGE Kate Bush fan and one of her songs is actually about sound as a weapon. I’ve always found that fascinating and so went with that as inspiration. This handily triple fit the criteria of the competition, an artist, an instrument and even a specific song (“Experiment IV”). You will see I also did it steampunk style, this is because Spencer at Landgrave does magnificent steampunk work and I thought he would like it.

So here’s the story, Professor Aldous P. Merriweather was tinkering away in his workshop one day when met with a piercing sound, the sound was so piercing it gave him a nosebleed! Turns out the innocent neutrino was not so neutral when accompanied by coil induction and some gizmo his pal Tesla had dropped around the last time they played bridge…. the Tesla trumpet was born! Tesla being private and well… a bit weird, wanted a name change, so Merriweather bought him a nice bottle of whisky and changed it to the ‘Neutrino Cacophony Radiator’… he thought it had a nice ring to it… ironic no? 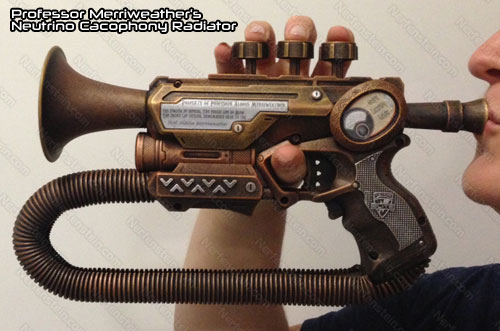 The competition states the gun must still fire and indeed it does, you just pull the mouthpiece as you would the plunger.

And that my friends is another Nerf modification. If you haven’t been over to Landgrave Customs Facebook page, check it out, he’s a cool guy and does some wicked mods. Till next time funsters!