Hi guys, back again with another Nerf mod write-up, or rather Buzz Bee mod write-up, given this is the Buzz Bee Single Tek pistol. Like the Mav2D2 mod, the Buzz Bee Single Tek pistol / blaster spoke to me and it said “there’s an alien lurking in me!” (I will point out the Buzz Bee pistol didn’t ACTUALLY speak to me, that would mean I’m a bit nuts!). The shape of this was similar to the curved shape of the Giger Aliens head, so that’s where the Giger Gun idea came from.

The Giger alien is synonymous with piping and a sort of industrial look. I went to the hardware store and bought corrugated piping in various sizes, along with a hot glue gun, some fake vampire teeth, spring wiring and various other bits and pieces that had the Giger Alien look. You will also note I removed the outer shell of the nozzle at the front (for the extending teeth / tongue feature), I also removed the ammo clips in the side and bottom. 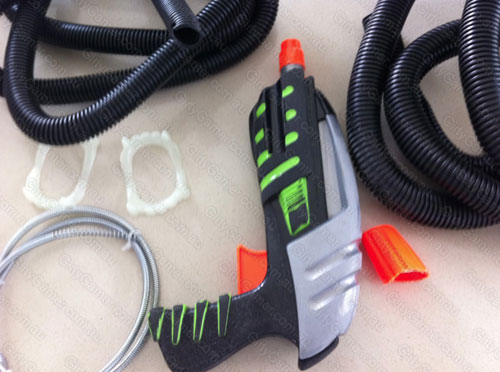 I won’t lie to you and tell you this is an easy cosmetic modification, because it was a bit of a pain. The cool thing is you can do this in your own style, just look up Alien images to get a rough idea. I used my Aliens Anniversary Edition DVD set (a large Alien head as it happens), just to see where the piping went. Needless to say, all gluing of piping comes AFTER you’ve done the usual full sanding, cleaning and removing the slide.

Once you’ve added everything where you want it (I also added in that infamous Alien ‘tongue’, just for fun, so the dart inserts into it, thus giving it a double set of teeth), just give it a couple of coats of matte black. 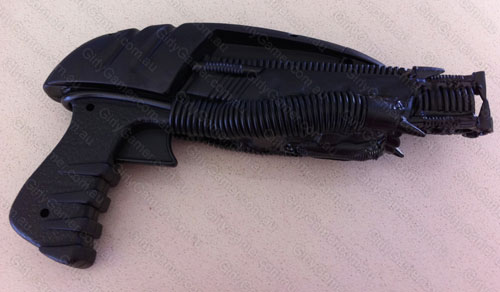 You can see your Buzz Bee Alien modification is almost complete! Time for some dry brushing. The cool thing with this mod is, the piping comes up great with some basic dry brushing. Also I went for a nice gloss coat over just the top of the head area (after some off green dry brushing), to give it a more Giger Alien look. That’s you.. finished! 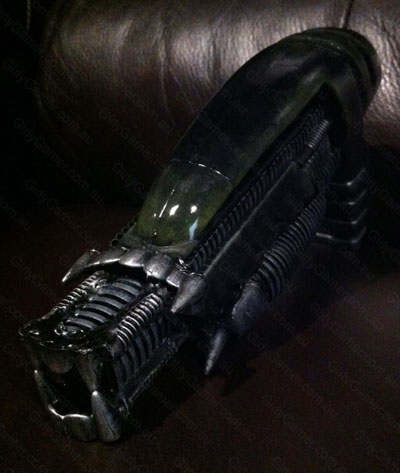 There’s more photos over at my new Facebook Page – Nerfenstein. Join me over there if you haven’t already.

This post was written for GirlyGamer.com.au and shot to Posterous, Tumblr and other social networks via Nerf means.