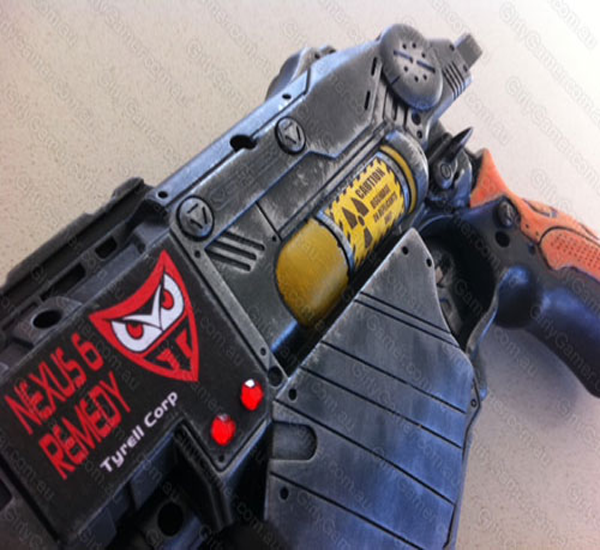 I got my first Nerf Vortex Proton this week and I couldn’t wait to mod this up! First up let me tell you the price-point on this is sick, $16. I was expecting it to be more, given in the same store the Nerf Maverick was $20. Anyway this isn’t my review, this is about the Nerf mod, so let’s get to it as we look at the Nerf Vortex Proton Blade Runner homage.

First up let’s look at the before and after shot. The Nerf Vortex Proton blaster looks cool before you sand and paint it, well other than it’s green, that could be better, still it beats the usual bright Nerf yellow I guess.

I hit this up with the sanding, cleaning and black base. I’d had an idea for this to make it a Blade Runner homage since before it launched in stores. It’s never going to look like Rick Deckard’s blaster pistol, so please don’t comment to tell me it looks nothing like that, I know, it’s a homage to the Blade Runner universe, not a replica of Deckards pistol.. obviously. 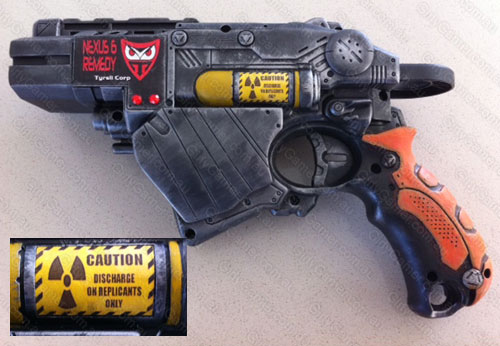 I was going to do the large facing area in stripes, but thought this would detract from the logo areas, so I left it as metal look, bland, but not detracting from the Tyrell Corp logo and the ammo warning. 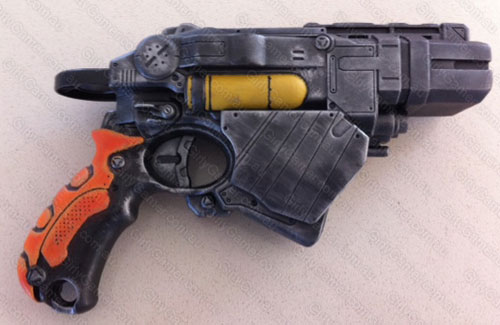 Hooo boy where to begin, I’m a beginner, but I thought I’d try and be clever with this and give it the resin / amber look orange of Deckards blaster… big mistake! The clear gloss spray ate the paint away on the grip after multiple coats… all the triple orange drybrushing I’d done melted into itself and the paint turned to a sludgy mess. So not cool. Time to scrape, re prime etc. Right, so then I just went back to regular drybrushing, sticking with the orange theme. Not as cool as the gloss looked before it started to go bad, but better than nothing.It’s a shame these images don’t show up the dry brushing better, it looks better in reality.

Also the Tyrell Corp logo was deep orange, to match the handle. As it dried in, it turned red… ARGH! Lastly, you will lose most of the lovely geometric detailing on the Proton when you sand, because it’s very fine / flat detail. 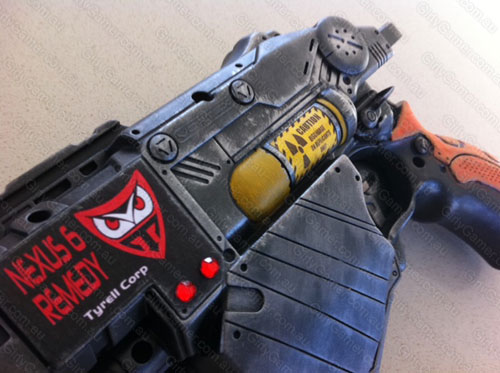 That’s it basically. I like this mod, but it’s not in the same arena as the Mav2D2 (Nerf R2D2 mod) I did last week (I still love him, he’s so adorable!). I’d put this one in the same range as the Weyland Yutani Nerf blaster I did a couple of weeks back (another sci fi homage, that one to the Aliens universe).

There’s no doubting the Nerf Vortex Proton is a great and easy blaster to paint mod. It is a shame you lose the geometric detailing when you sand however.

As usual if you are seeing this on Posterous or Twitter, I never check those as my posts are automatically sent there via tiny magical hamsters. To join in the comments, please visit GirlyGamer.com.au to be seen.