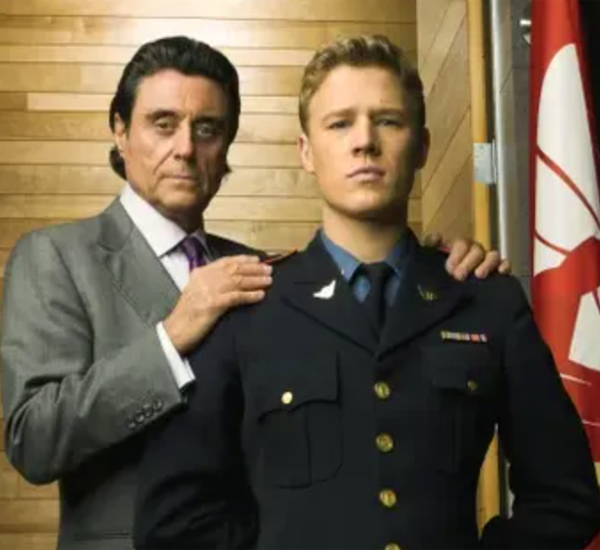 Kings TV series by NBC some thoughts and BSG musings

When I discover a TV show I think is great, I want to share it. When I discover a show that has a similar feel to one of my all time favorite TV series, I want to share it more. That’s why I’m bothering to write about “Kings” an NBC show that’s long since left screens. “Kings” ran on NBC from March 15, 2009 to July 25, 2009, it had a 13 episode – one season – run before it was axed. NBC’s axing of the series is really its main negative point, because it is clearly set up story-wise for a second season, oh well, them’s the breaks. I still think “Kings” deserves a full post, that will be spoiler free, after all I am trying to woo you to check it out, so it would be silly of me to spoil any major story elements.

I decided to watch “Kings” because I was looking for some new TV DVDs I didn’t already own or had seen. It had always nagged me I’d only ever seen the pilot screener some time ago and that I had remembered it positively, yet never saw the rest of the season. I started the series again from episode one, here are some things that stood out.

“Kings” is clever because it plays off a few things we’re familiar with. Firstly biblical stories most people have some knowledge of, along with an overarching theme of the monarchist rule. “Kings” is set in the fictional Kingdom of Gilboa ruled with firm hand and silver tongue by King Silas Benjamin (played superbly by Ian McShane). Shiloh is the capital and although we know it’s really New York, it does feel like – despite the modern setting – this is indeed a faraway kingdom. Gilboa is at war with Gath, a neighboring country and I’ll say little more, because after all you’re going to watch it aren’t you?

The characters in “Kings” are fantastic, not least of all McShane who comes off totally believable as King Silas Benjamin. The other main character is David Shepard (played by Australian actor Chris Egan), a young man thrust into the world of murky political and military dealings. You can see in this image the royal family, King Silas with his wife, son and daughter. All the actors are fantastic. A special shout out also to Susanna Thompson as Rose Cross Benjamin – queen of Gilboa, superb.

Not much can touch “Battlestar Galactica” (the Ron D. Moore reboot), for me. The overarching story, the characters, setting and actors were magical. I wouldn’t put “Kings” in nearly the same category, but it certainly features similarities to that series, from the religious overtones to the rich characterizations of some of the characters. “Kings” drops the ball a few times, but overall I thought it was masterfully made and a travesty it wasn’t renewed. There is something classy about “Kings”, perhaps it’s those little touches that made “Battlestar Galactica” so special, the nuance, the amazing orchestration (which at times in “Kings” is VERY Bear McCreary like), the play on faith. Whatever the case if you missed “Kings” give the first couple of episodes a watch (it debuted as a double episode, so make sure you watch at least 2 and not one which would essentially be half an episode). If you do watch it, drop by the comments and let me know what you thought, I’d love to hear it.