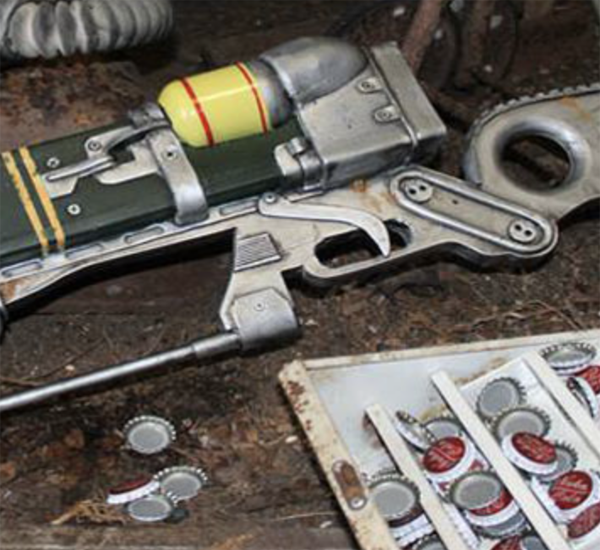 AER9 Laser Rifle from Fallout – Another one

Yup, it’s another Fallout rifle for a client

Another month another prop commission completed, this time another Fallout AER9 rifle. Because I’ve done a few of these now, I thought rather than write it up repeating myself I’d just give a quick rundown and then I’d interview the guy who bought it.

Why you may ask? Well, because he uses cosplay in a very special way and I want to help get word out there about it. Also a lot of what they do is local to me, which makes it doubly special.

First up the AER9 Laser Rifle from Fallout, another foam build with a solid center piece so it’s not all floppy when you’re holding it. Although I love building things completely out of foam the AER9 has some features where the real thing is actually better, the wire for example. Top tip, if something is rubber – like the wire on this – enamel paint will have an adverse reaction to it and not dry, always add these things on AFTER you’ve painted everything else (acrylics aside).

Now to the guy who bought this puppy, the Executive Officer of Drawn2Life – Found on the web at the Drawn to Life website and Facebook Page.

You’re one of the key members of Drawn 2 Life, can you tell us more about that?
Drawn2Life is a wholly volunteer group, with all members donating their time and costumes.

We launched the group back in 2012 because at the time there was a demand in the cosplay community where cosplayers wanted to do charity work, but found it difficult due to the various legal requirements of such work.

The idea of the group was that we could remove some of those barriers, not only taking care of the legal side of things such as insurance and Bluecard sponsorship, but that we’d also present a professional face to deal with clients to facilitate and organise costumers participation in events.

We also try to create a friendly community where like-minded people can geek out together over comics, film, video games and other pop culture mediums.

In June 2015, we had our third birthday, and have attended over a hundred events so far, meeting many thousands of children and raising many tens of thousands of dollars for various charity groups.

Over time, I attended and organised many of the group’s events, and quickly rose to the position of XO – second in command.

I oversee all aspects of the day to day running of the group and have a hand in most of the events and appearances we have.

You have a very impressive cosplay / costume / prop collection. What’s your most prized costume or item and why?
I currently have about 36 different costumes, and it’s really difficult to choose any one specific item or costume as a favourite. A lot of the characters I choose to costume as, come from my childhood. As a kid, I personally spent a lot of time in and out of hospital because I was quite ill. So I gather that part of my costume obsession with characters from the 80’s is a way of me reclaiming and reliving some of that missed childhood. Because of this, most of my costumes and props have a pretty high level of personal meaning to me.

It’s a lot of careful budgeting and planning months, even years in advance what projects I want to do. Costuming has become a lifestyle for me, and it’s come at the cost of me sacrificing most other hobbies and pursuits.

Because I combine it all with the charity work, it’s allowed me to justify that focus and the sacrifice needed to maintain it. Because even though I get a ton of enjoyment out of my costumes and props, it’s not only for me anymore.

For every sick child I make smile, or for every dollar I manage to fund-raise for a charity, it helps me feel that the pursuit is worth it.

How do you fund all your amazing projects? Any tips for others?
I always have a long list of costumes I want to do. I’m a pretty determined and motivated person though, so for the majority of them, I don’t allow them to remain solely as dreams. I remember when I began costuming back in 2010, I saw someone had done a Brotherhood of Steel costume from Fallout 3. It was a dream costume of mine, and in 2013, I finally completed my own.

If you could have one costume or prop that you don’t presently own, what would it be and why?
At the moment I really want to do a Hunter from Destiny. Not sure how long that’ll take to realise… but I’ll get there one day. ——–========——–

Now you see why I wanted to do the interview. Drawn to Life is a fantastic idea and a wonderful reality. People like Matthew are – to me – what really takes cosplay to that next level, it’s not just about him, it’s about other people and their well-being also. I love that idea. Well done matey and I’m glad you like your prop. I’m hoping to become more involved with Drawn to Life myself in some form. We’ll see what transpires!

4 thoughts on “AER9 Laser Rifle from Fallout – Another one”