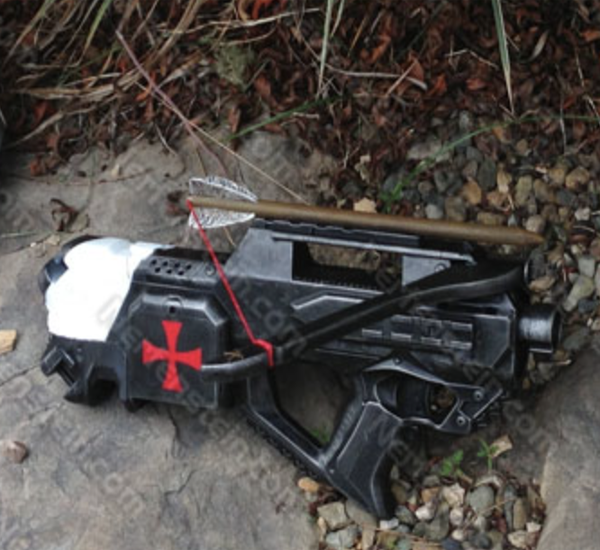 I realize people will probably think this is something to do with the Rebelle bow, it isn’t. Now that’s out of the way… I was inspired to do a bow mod a few weeks ago (prior to the Rebelle announcements) when I was contacted about a ‘steampunk Crossbow Gun’ commission. I started to think it would be cool to have a repeating Nerf crossbow. Given I am for the most part a prop maker and cosmetic modder and not an internal Nerf modder (other than the basics) I went with the obvious option, Nerf gun crossbow mod, a Nerf gun that looks like a crossbow, but fires regular ammunition. This means it’s still Nerf War legal, looks kick ass AND anyone can do it.

As you know I’m a big believer in using what you have, particularly things from around the house, so start rifling through your cupboards, you’re looking for a wooden coat hanger that looks similar to the one in the image. This is perfect for a crossbow mod and will save you loads of work making the crossbow limbs. Start by removing the cross bar and the hook. I left a little of the hook to attach something decorative to the front, though this is entirely up to you. Bingo.. bow limbs complete! That was simple.

Next up you’ll need a Nerf Rayven (how can you make a Nerf Rayven crossbow without a Nerf Rayven!). The Rayven is one of my favorite Nerf designs, Hasbro outdid themselves with this beautiful blaster. You’re about to chop a little off.. be gentle. Those struts at the very front that come off the front of the picatinny rail are toast, take a hacksaw or Dremel to them. You want to leave the overhang and remove it flat to the top (just above the Rayven logo), this is so your bow limbs can slot in, it should fit perfectly when you’re finished, snug and secure, glue it all in place once it’s all sanded and neat. It should look like the image to the left (this is a test fitting before sanding, so don’t glue it in until you’ve sanded the entire blaster and the bow arms).

Your Nerf Rayven repeating crossbow is taking shape. Hold it up, feels pretty good! If you’re not into jazzing it up more, you could literally finish it here, paint it up, add your string and you’re good to go. I wanted mine to look more crossbow like so I made a single bolt to attach to the picatinny rail. If you want to do that I took photos for you.

Get some dowel / balsa, measure it out to the correct length… up to you, but remember you still want to access the unjam door, sand it to a point. For the fletching (feathers) I used styrene and melted in the detail, this is entirely up to you, use what you have. Cut them to the shape you want, I went with rounded fletching, you might want it squared (keep in mind that unjam door). Split the dowel at one end into evenly cut notches (saw directly into it twice, turning it once so your cuts are degrees 90-270 / 0-180), essentially this looks like a cross cut into the end and is cut in the length of your fletching. Glue and slide the fletching in place. I also added a fake knock to the end so the string had something to sit it (I used a small piece of round plastic and cut a groove in it, again, use what you have, a small piece of the dowel off cut would also do the job. And here we have it all painted up, I went with a templar look, just because I liked that idea, you do whatever you like. 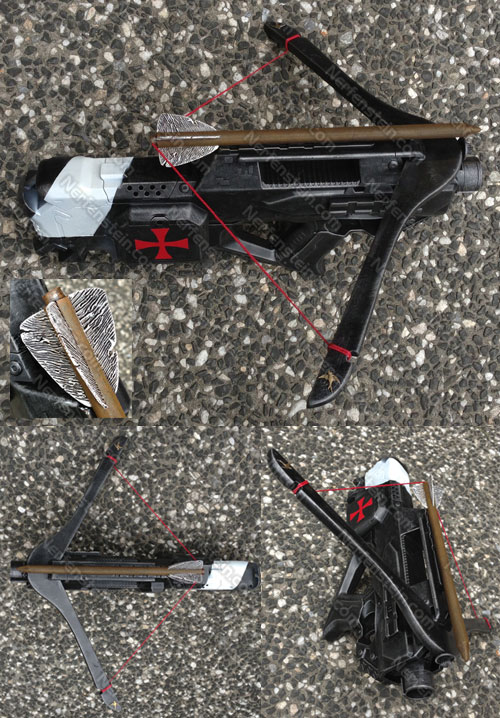 That’s it, another Nerf modification done. I hope you’ve liked it and you find this post of use! If you use this idea, please give me a link back / credit, it’s a little thing, but it’s a nice thing to do 🙂