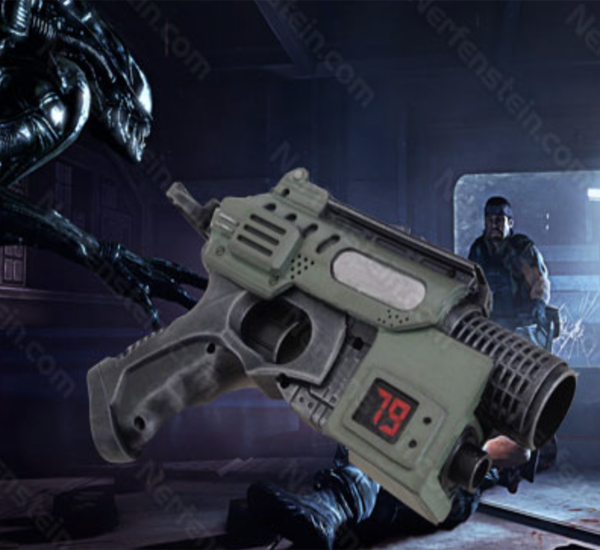 Aliens fangirl has thoughts on the game

People who follow me on Facebook, Twitter or the other SocMed sites will probably know what a MASSIVE Aliens franchise fan I am. I own multiple Alien movie sets (multiple DVD and Bluray sets), including all the special editions, Alien and Aliens are my favorite movies of the series. My favorite weapon of the series is of course the M41A Pulse Rifle, living in Australia however means I can’t own one. In Aliens: Colonial Marines they’ve added to the weapons arsenal and one of the guns is a cut-down Pulse Rifle. I totally love this idea and I am working on a build of the in-game gun, but in the meantime I thought I’d do a Pulse pistol mod, a homage to the idea that the M41A might have a baby brother weapon.

I chose a Nerf Nite Finder as the base because the Nite Finder is an excellent blaster to shell and the only other Nerf pistol I had handy is already on its way to being something else. I used the top part of an old toy shotgun and styrene for the main mod. I still haven’t found a flat Army green that’s not extortionate in price, so I had to go with what I had as opposed to what I hoped. Boom Nerf Nite Finder Aliens Colonial Marines Weyland Yutani mercenaries sidearm done! Needless to say it does still fire and no the ammo counter doesn’t work, can you imagine how fast you’d need to load this thing for that to even matter?! lol.

Speaking of Weyland Yutani mercs and things that don’t work….
Aliens Colonial Marines video game thoughts
When you’ve waited almost 7 years for a video game to actually hit shelves there is excitement in the air. I shelled out ridiculous money for the limited Power Loader version, that was probably my first mistake. I had assumed you see that the game would be great, it’s Aliens after all, and Gearbox – Duke Nukem aside – how could this go wrong? 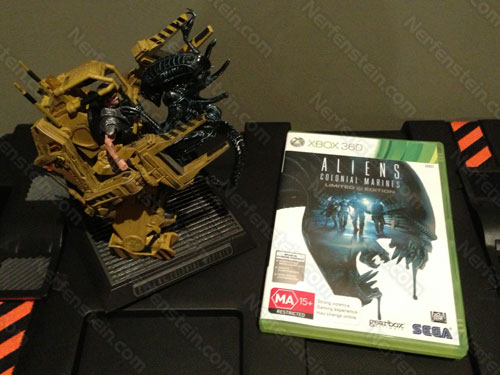 What’s wrong with Aliens Colonial Marines? (This will have SPOILERS so keep that in mind)
The story messes with the… err.. story!!
Remember that blast bigger than the size of Nebraska? The one that happened when sh-t went down on LV-426 and the atmosphere processors went nuclear as Bishop barely scraped away (after giving Ripley a heart attack!). Apparently Gearbox forgot that piece of vital Aliens history, because everything is still there, even the fluorescent light on the “Bar” is on. Upside, they add in the trike we see in the Directors cut.
Now it REALLY messes with canon, Hicks is alive… Say What?! And the explanation, rubbish. The upside of this is Michael Biehn does the voice.
Next up there’s the huge fully working research facility that’s been built, stocked with Aliens, Facehuggers, unsuspecting hosts, test subjects and loads and loads of Wayland Yutani mercs. They’ve been working here for some time too, odd given there’s only what… maybe a couple of months since the end of Aliens? Riiiiiiiiight.
Drake and Apone? I watched the credits role after I completed the game and it said Mark Rolsten and Al Matthews were both voice actors. I assume this is multi-player or I was asleep when they made their entrance. I guess they survived too then.. acid burns and hosting evil aliens and all.
Don’t get me started on the Sulaco and Fiorina Fury 161… 19.5 light years from Earth and why it took Sephora all the time it did to respond to Hick’s distress signal.

I could go on, but you get the picture.

Having said all that I played the entire thing through. I realize this game will go down in history as an embarrassment and one of the worst games ever made, but my Alien loving self enjoyed it. I said on Twitter it’s the junk food of video games, you know it’s bad but part of you enjoys it…. that pretty much sums it up. Some of the orchestration was good… she said trying to finish on a positive.

Till next time Aliens fans… Nerfenstein out!