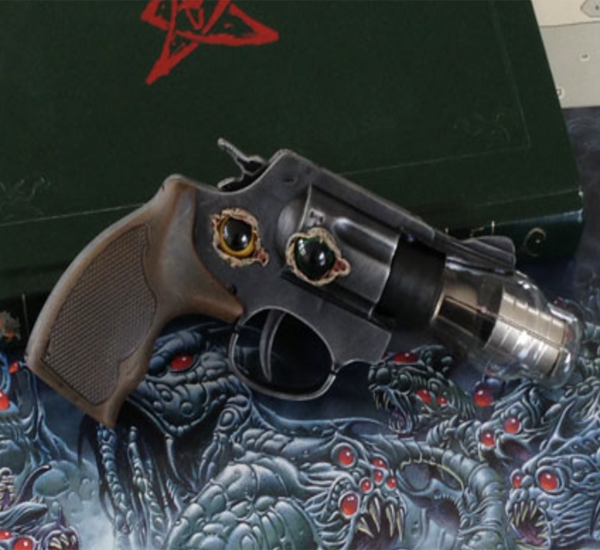 The Gun of Souls revolver mod – The eyes have it

A Cthulhu Mythos based blaster

This was actually a practice mod so think of it as “Gun of Souls” V1.0 basically I didn’t want to ruin a Nerf gun (which is the gun I wanted to give creepy eyes to) by trying this idea, so I found an old toy revolver I had laying around and set to work.

As you can see the whole idea with this weapon mod was to give it eyes, I nabbed some teddy bear eyes from the craft store, who knew teddy bear eyes could be so evil looking! These were inserted from the inside and partially pushed through. I kept the eyelids wrinkly because let’s face it, soul sucking weapons don’t get eyelifts. I also added a vacuum tube instead of leaving it the standard revolver, so it sort of became this cool soul sucking tesla pistol, I might even box it up as such before I sell it, give it some extra schwing! 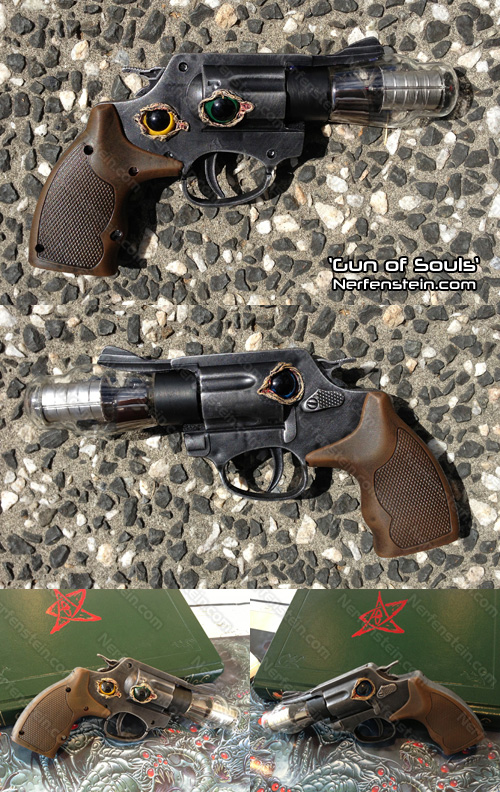 I also came up with a little story for this one, because … well.. why not….
The Gun of Souls is a cursed weapon that’s been around for many years, The Gun of Souls has an interesting way of ensuring it is always in the public realm, firstly when you become the owner of the Gun of Souls, you can’t get rid of it and nor would you want to, because you need it, it will protect you from bad things, you feel safe with it nearby. The Gun of Souls is your little metal friend.

Like another famed cursed / powerful metallic item, the longer you have The Gun of Souls in your possession, the more ‘precious’ it will become to you (you got that right “my precious”) and you will protect it at all costs, even using it… which feels good.. you want to use it… you need to use it…

And that my friends is The Gun of Souls, a practice mod that actually turned out really cool. Expect to see more soul eating weapons soon.