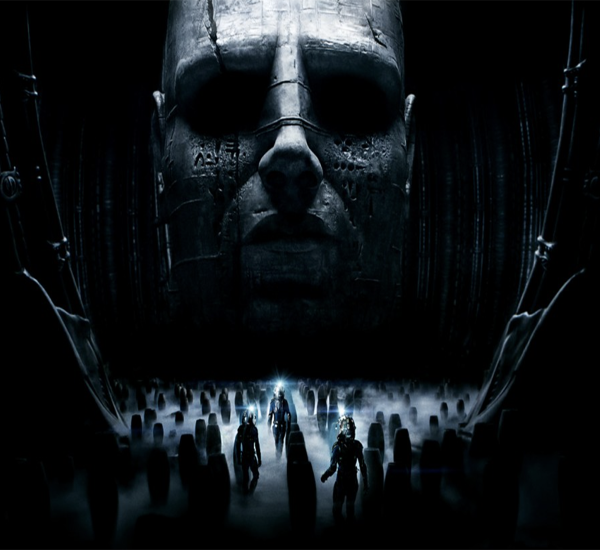 Finally after years (since first hearing of it) “Prometheus”, the non-prequel prequel to the “Alien” franchise is with us and wow, is it ever polarizing. I figured though I usually post about blaster mods and props here on my blog, it is my blog so – for prosperity – I’m jotting down my waffly thoughts about what I liked, loved and loathed about Ridley Scott’s “Prometheus” movie.

Firstly this post WILL FEATURE SPOILERS, but I’ll warn you before I start posting them, because we’re not there yet. Secondly I am a total Alien and Aliens fangirl, so let’s get that right out there, Aliens is my favorite movie of all time and Alien is in my top 5. I know the scripts of both almost off by heart and I’ve read and even studied both movies at university level, needless to say I was either going to love or loathe “Prometheus”… I loved it, but it did have a few problems.

PROMETHEUS SPOILERS FOLLOW:
This isn’t a review, just some discussion / thoughts about the movie.

Science and religion, what a messy philosophical web we weave. Prometheus tried to broach the touchy issue of religion / faith / science and it did so to fair effect. I enjoyed the idea that “life here began out there, far across the universe”, but that may be because I’m a bit of a fan of some ancient astronaut theory and Battlestar Galactica. Prometheus’ beginning with the primordial soup / or engineer aided biogenesis (or was it abiogenesis) had me hooked straight away. Mans quest for immortality was also touched upon, heck when you delve into it Prometheus runs the gamut of sociological undertones, just as its non-sequel Alien managed all the way back in 1979. If you think about it, Prometheus featured all the classic sociological and psychological themes, class, gender, sexism, the human condition, religion, science, industry, family, politics. I wouldn’t be surprised if papers start popping up all over examining Prometheus via one sociological perspective or another, just as Alien has become tantamount in sociological analysis on class and gender.

Prometheus managed to touch upon those themes whilst also giving us a fairly kick-ass science fiction movie, that’s some feat, despite what the haters might be thinking. That’s not to say it was perfect of course…

Prometheus silliness…
These things could probably be fixed with additional scenes, so who knows, maybe they’ll be on the bluray release. Here’s the upshot of things that annoyed me in Prometheus:

Elizabeth Shaw’s caesarian and post caesarian athleticism
IMO this needed just a few seconds of additional footage showing the future tech of the Med Pod, with a display or something showing it had essentially healed Shaw to 70 or 80% prior to her leaving it. Let’s face it, seeing her insides ripped out, staples shot into her only for her to be climbing, jumping, running etc moments later was.. ‘Prometheus silly’ even if she was hyped up on pain meds.

Milburn’s nonsensical reaction to the snake in the goo
Maybe a scene earlier showing Milburn to be the type of biologist who is intrigued, though naive about biological life would have made the fact he was treating an unknown – possibly dangerous – alien creature like a cute stray cat more believable.

Wait what… Reapers
Slightly more confusing than the med pod or the alien snake petting was the ‘we made you now we’re going to kill you’ thread. I was having flashbacks to the ending of Mass Effect 3. I do suppose this is covered ever so swiftly when Shaw’s boyfriend Holloway and David are discussing his creation by humans, during which something about humans making him ‘because they can’ is stated. Perhaps that explained it, though I’m not so sure, I’m still confused on this plot point.

No Prometheus batteries / shields?
A hugely expensive mission, with the head of Weyland Industries on board and the ship has no armaments / weaponry? Also the people handpicked for this massive mission are all fairly dumb, particularly the biologist and geologist, but also pretty much all of them. I mean seriously, taking your helmets off just because there’s breathable air? Not Cool. Also there’s no command stream, though this goes for Alien and Aliens as well, so I can forgive this as it actually lends itself to the overall tension of the narrative. No one is in charge and when the person who thinks they’re in charge (Vickers) tries to show that she is, it all falls apart because no one cares, she’s essentially like Gorman… with a flamethrower.

A Rubik’s Cube… I’ll say no more… that was lazy prop making, though I imagine the prop making community is happy given how simple that should be to replicate.

Vickers for goodness sake, if something is rolling toward you slowly due to its bulk and is following a particular trajectory… RUN SIDEWAYS!! Her death was a total letdown. She was meant to be the villain I assume, like a Carter Burke character, but she wasn’t and for this reason the glee I should have felt as Engineer Ship 01 rolled over her was lost. I wanted her to survive, I wanted to see more. SIDEWAYS FFS VICKERS!

What I Loved – Prometheus Alien / Aliens crossovers!
I couldn’t help but notice there were numerous scenes and even some dialogue that must surely have been a cross over / shout out / homage to Alien and Aliens, purposely added to the Prometheus script. Sadly I can’t remember them all now, but things like Vickers asking what the creature was changing into, or Vickers toting the flamethrower and saying Holloway can’t get on board (total Ripley shout out from both Alien and Aliens). The opening credits for goodness sake. David’s head saying “I can hear you”, shout out to Ash in Alien. That’s without the obvious interior shots of the Prometheus itself, the egg / urn room and all the other ones I have forgotten.

Bits missing in Prometheus
The trailers to Prometheus featured certain things I think were missing (I could be wrong I’ve only seen it once at this stage), most notably was Shaw seemingly praying in an alcove in the corridor of Prometheus pre or post caesarian. Maybe she was just clenching her hands together in agony, either way I don’t think it was in the film.

Also wasn’t there a bit in the trailer showing a guy leaping on someone inside the main hold, I assume this was when Fifield lost his sh-t, but I don’t think that was in it. Feel free to add others to the comments.

I just re-read the previous Prometheus thoughts and I’ve kind of hovered over the things I didn’t like more than the things I did, which is weird given how much I liked this movie. Prometheus was never going to please everyone. Given its link to the Aliens franchise – particularly Alien. It was really fighting a losing battle, because Alien is historically significant science fiction, in much the same way Blade Runner, ET, Star Wars etc. were. You can’t match that sort of greatness, it’s nigh on impossible.

Like all the other fans I wanted it to and it didn’t, which is utterly ridiculous, my expectations were crazy high, too high. I believe that is PART of the reason it’s getting bagged left right and center. Despite that I still believe it is a great movie, sure it lacks the genre breaking genius of Alien or the characterization of Aliens, but it did feature a fairly solid / intriguing story that brought many aspects of those two greats together and in a manner that didn’t sh-t on the franchise (unlike those other unmentionables), for this it deserves some kudos.

What did you think of Prometheus and do you remember more of those Alien Aliens crossovers in the movie?