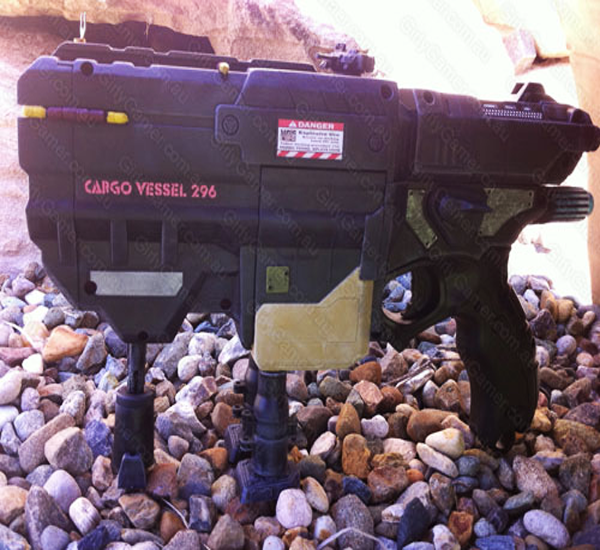 Nerf Vortex Vigilon mod deep space mining cargo vessel “Ripley’s Hope”. Back again with a weekend update! Just finished the Nerf mod I’d been working on this week, the Nerf Vortex Vigilon.. chunky gun! One thing sprang to mind here… CARGO! Yes cargo containers, more specifically deep space cargo cruiser. Given the shape and overall mass of the Nerf Vortex Vigilon, this was not a huge leap to make. I decided to add some landing struts so the gun would stand on its own, like a starship model. Let’s have a closer look… 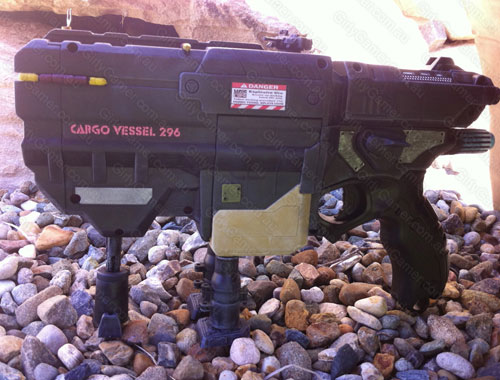 Prep for this started the same as always, lots of sanding. The Nerf Vortex Vigilon is a HUGE gun, with a lot of empty space, problem being you can’t just take a hacksaw to it because of the way the internals are set out, you will be sanding for a long ass time. Once sanding was done it was time to attach the landing struts. This was a disaster, the initial struts I made crumbled when I painted them… some weird reaction.. anyway, back to the drawing board and something more solid. 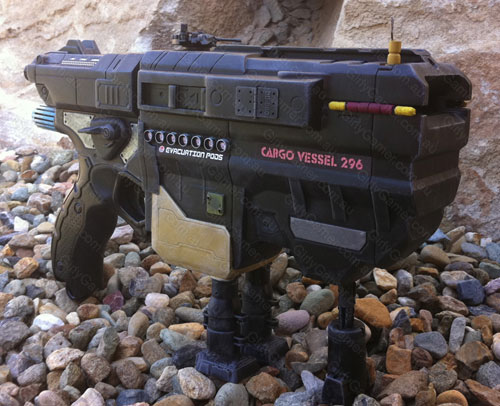 Buzz Bee fans have probably spotted them… Belt Blaster dart cases, two of them for the main landing struts. I attached these to wall plugs (screw in) for strength and the ‘feet’ at the base of the struts is actually the turrets off two toy tanks. I liked them because they had depth / detail, rather than just being flat. The Buzz Bee Belt Blaster cases ended up looking better than the initial landing struts, so the disaster was a blessing in disguise. The front strut is a door frame from a board game (solid plastic) and a starter switch case I had in the tool cupboard (Nerf modding = use what you have!). The 3 landing struts are really strong and bonus.. the gun now stands on its own (like a starship model)… perfect for shelf storage. 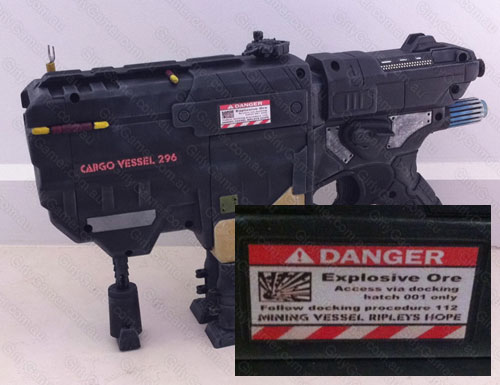 On one side I decided to add a row of escape pods (EEV) because if you were a crew member on a mining / cargo vessel carrying explosive ore, you would want your EEV section!! Initially I just dry brushed these (I think they’re little electrical caps, sorry I found them in Bunnings (hardware store) and can’t recall the name), then I decided they weren’t detailed enough, so I did an actual escape hatch door in photoshop, shrunk them down and stuck them in the caps… faffy, but the detail is nice. 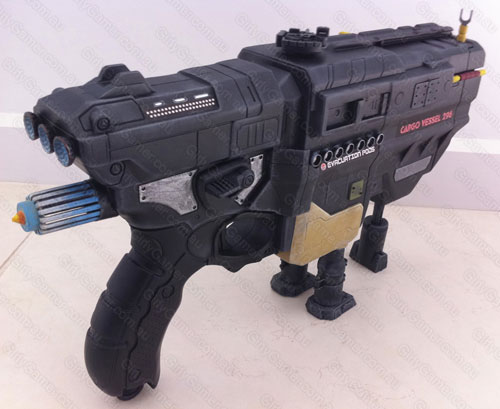 The crew of deep space mining / cargo vessel “Ripley’s Hope” needed a place to live and the slide part of the Nerf Vigilon is perfect. I figured being a huge cargo ship, the living quarters would be pretty small by comparison to all the storage area and engineering, as well as the hangar / landing bay for small exploration ships (the main ‘barrel’ area where the discs come out). The cool thing about the Nerf Vigilon slide is, it already has what looks like 3 long windows along it. I imagined these as main areas, mess deck, recreational area etc. Under that I added a lot of tiny windows, denoting crew quarters… size wise this worked out really well.

I just did this to one disk because basically I am a geek and I couldn’t resist.

I made a Battlestar Galactica Viper Nerf disk… so essentially when you load it, it’s like the ship leaving the chute like on Galactica.

Of course it moves so fast once launched, you’ll never see the actual viper, but that doesn’t take away from how nerdtastic it is to do it just once lol. Go on.. you know you want to don’t you.

That’s your lot. You’ll know a lot of dry brushing and detailing went in, but I think I’ve covered the main bits for those wanting to give it a crack. As always if you do make one, a link back would be cool and of course I’d love to see it!

Right.. what next.. I’d start a new one tomorrow.. but the damn sanding is putting me off lol.

This post written for GirlyGamer.com.au and some other photos appear at the Nerfenstein Facebook Page. Launched through deep space to Tumblr and Posterous.. and lord knows where else.