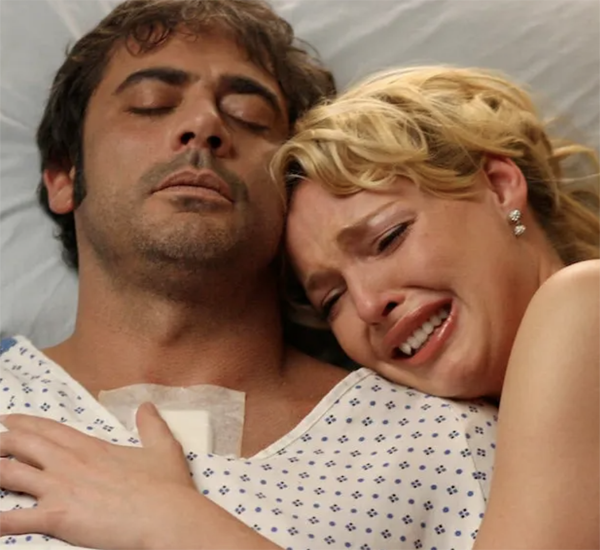 The saddest TV character deaths I can think of

Clearly I am in a morbid mood today as I decided to cover the saddest TV character deaths I can think of. You know the score, you’re sitting there watching a show and then BAM you’re sobbing because some TV show character up and decided to die! This post comes off the back of the death of a lead character in Packed to the Rafters this week. I can’t say I sobbed at the death of this TV character, more for the death of the series without this character, but it got me thinking of times when I did actually shed a tear.

Needless to say there will be spoilers. I’ve headlined the show in giant letters with the character who dies below it, so you can skim read and if there’s a show you intend to watch (since they’ve all aired) and you see a show in the header text and you don’t want to know who dies in it, just skip to the next.

Right let’s get to it the saddest TV show character deaths:

As saddest TV character deaths go Denny Duquette and George O’Malley are two of the big hitters. I was an absolute wreck for both of these TV deaths. The Denny death scene upsets me just to think about it! And the shock of George… gutted!

So this wasn’t a shock, after all the bad prosthetic baldy head was a hint her cancer was pretttttyyyy bad. Still when Dana Fairbanks bought the farm while Alice was away buying her a singing flower it was crushing.

Okay so there’s loads, probably more than this, but for me the saddest TV character deaths in Buffy, include Buffy herself, Buffy’s mom Joyce and Tara Maclay – Do I really need to say anything else? No, didn’t think so.

Yeah I’m getting high, oh no I’m not I’m going for a swim!! Remember lovable Nate doing that? And then… he was gone.

Molly Jones – If you’re an Australian you will know this death as probably the most memorable TV character death in the country. So sad. Kermit and the rainbow connection and that damn kite and then the scream MOLLY! Bye Bye Mad Molly Jones.

Awww little Charlie Pace, the self sacrificing little devil, who else shed a tear when he bought the watery farm? Yeah I know how Lost ended.. guess this didn’t really matter overly.

One of my all time favorite shows. When Roslin died I was an absolute mess. I think I even welled up when Anastasia “Dee” Dualla died, but that was more to do with how all hope was lost than the character. Starbuck going kaboom as Lee screamed after her… omg! Also Dee’s and Starbuck’s deaths fall into “Most Shocking TV Deaths”.

This guy was cool, yes it’s Mark Greene – “Mark died this morning at 6:04am, the sun was rising” omg.. how gutting.

Sweet little naughty girl does good Jen Lindley – Any show that features a much loved character making a goodbye video for their baby is sad and grams saying “I’ll see you soon” OMG it killed me. Definitely one of the saddest TV show deaths.

Packed to the Rafters

Recent loss to the TV world, it’s Mel Rafter – sniff, not only because she died, but also because she was the only good / likable character left on the show.

There was a TV death this week that made me cry, but because it’s so new and has only aired in the States and not Australia, I’ll not include it. If you saw a great new Showtime series this week, you’ll know the character I’m talking about. I was majorly bummed as said character was one of my new favorites.

What TV character deaths had you sobbing?