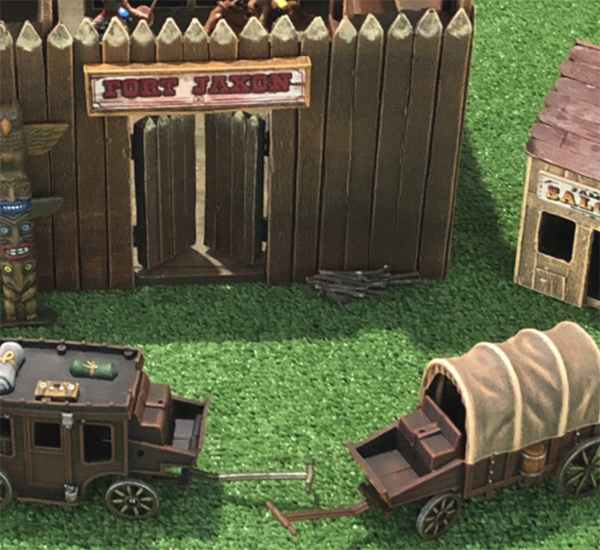 Cowboys and Indians… Wild West Fort project for my FIL:

The discomfort of working on a culturally sensitive project was hard to avoid when I was asked by my father-in-law to help him with a Wild West fort he wanted to make for my grandson, even this title ,made me feel icky, but that’s what it was called. When he was young “cowboys and indians” were a toy you just played with (heck even when I was young it was a thing), but now he’d commented how difficult it was to get the ‘cowboys and indians’ toys. I told him why I thought that was and he didn’t understand the problem. We had a few discussions during the project that showed his views and my views differed greatly on American history and the rights and wrongs of glorifying what was a violent and terrible time for the native populace.

I didn’t want to say no to the project. I was genuinely impressed with the work he had done, turning a little crate into a really cool fort, with just some glue and icy pole (popsicle) sticks.

I decided I’d throw all my help behind the project and would take the opportunity to teach my grandson about US history and the skewed narrative of frontier settlement that something like cowboys and indians portrays (as my father-in-law stated “the indians are the bad guys” … err NO).

So, politics aside, let’s talk the actual project. My job here was to paint and decorate essentially. The fort, outbuildings and toys.

I did a black primer coat on everything, dark brown dry-brush on the fort, followed by a red brown dry brush and some tan / white along the top to denote the cut logs forts were made of. I also did the inside in brown and drew on the logs on the inside, just so it matched the outside.

Signs were added to the outbuildings once they too had been painted. I did the outbuildings in a tan color, to make the popsicle planks really pop. My father-in-law couldn’t believe how much they looked like actual cut planks, and I have to be honest, nor could I. The fact he’d staggered them led to a nice effect.

The toys looked a bit rubbish to be honest, so I decided to not paint the cowboys or native Americans, I just painted the inanimate objects. Surprisingly they came out pretty nice, given the shoddy quality.

Anyway that was my latest art project. It brought up a lot of interesting things for me. Generational differences were hard to ignore, thoughts about historical narratives and how differently they can be read. To my father-in-law the cowboys were the good guys and what happened “happened, we need to just forget it and get on, it was a long time ago”. We had a short discussion about how I thought that had a little merit, but overall was wrong, particularly for the victims of what essentially was racial genocide.

The genocide of indigenous peoples is not restricted to North America, lord knows we have our own issues here in Australia. Mass destruction of entire communities of indigenous peoples and the eradication of culture is something we should never just ‘forget and move on’ from. I’m hoping this toy fort will lead to a discussion with my grandson, nothing too heavy right now, he’s only 4, but an opening dialogue to understanding what happens when settlement occurs.

I hope you’ve enjoyed this post, whether it be for the toy build and paint, or for thoughts something like this might make you ponder. It certainly made me think a lot about historical context and how through popular culture (western movies for example), things can be highly skewed.

Thanks for reading
DO GOOD THINGS!
Nerfenstein Out.