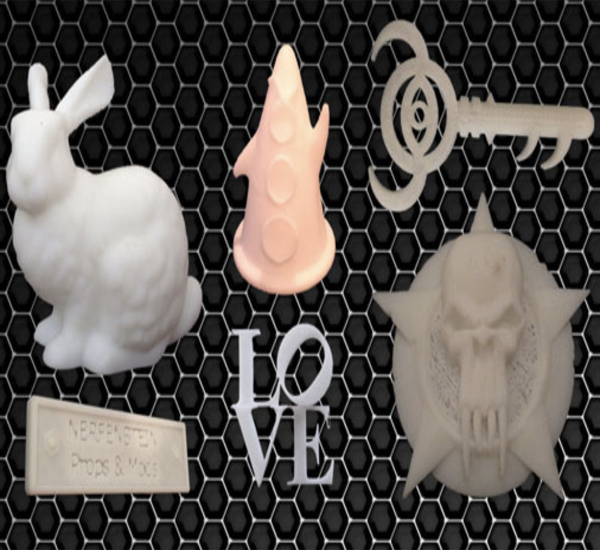 Beginners 3d printing adventures and UP Plus 2 3d Printer review

Just got a 3D printer

I thought a 3D printing first impressions from a total beginner article might be useful, as I’ve noticed a lot of ‘beginners’ 3d printing articles are more ‘intermediate’.

I’ve hoped to have a 3D printer for a long time and last month my dream came true. About a year ago I pre-ordered a printer from Cubify, but after a multitude of failed delivery dates and poor customer service, I canceled the order.

That actually turned out to be a blessing in disguise, with my pal Chris from Hypercats giving the Cubify 3D printer a big thumbs down.

Happenstance played a part in my recent purchase. Fellow prop maker and friend Amelia from Combustible Props gave me the heads up about a deal on the 3D printer she herself had recently purchased. Given the feedback Amelia had about her experiences with the machine and the fact I trust her judgement, I hit the site and clicked add to basket. The 3D printer was purchased! I then felt a little sick.

The printer I opted for is the Up Plus 2. Here are some first impressions.

First up, the customer service with this company has been nothing but great thus far. I received the printer and extras within a week, and that was over the Christmas period. I got email updates about shipment also. 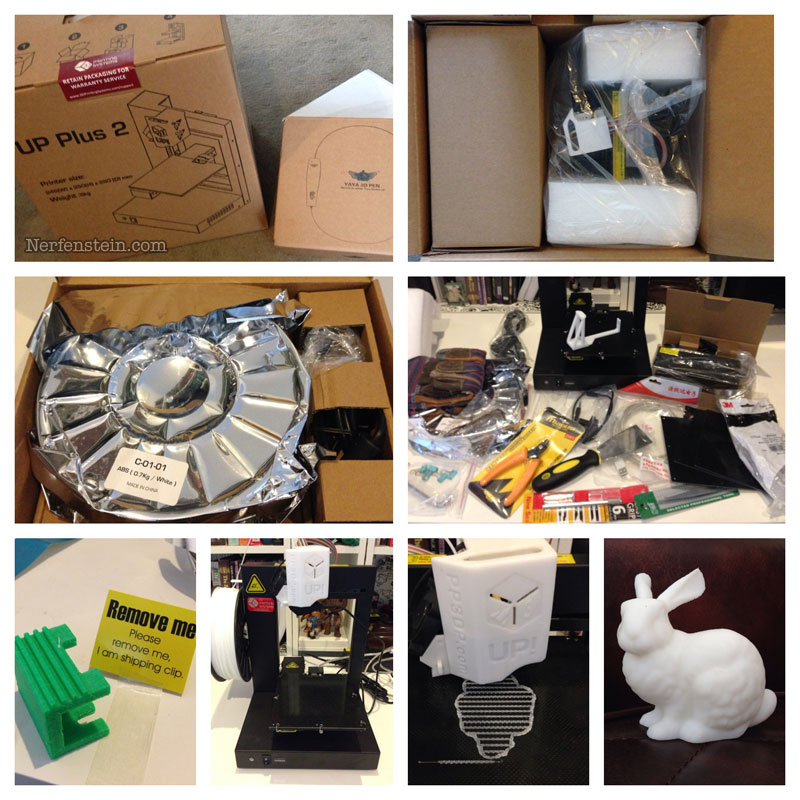 Unboxing the Up Plus 2 3d Printer – first impressions
Everything was neatly boxed, great packaging. The Up Plus 2 was a lot smaller than I had imagined in my mind (after seeing images online). The print bed area is tiny (actual size 14 x 14 x 13.5cm, but that’s edge to edge, which it doesn’t print to), but it does the job and that’s all that matters. Upside, this meant I had room on my computer desk because this wasn’t as large as I thought. 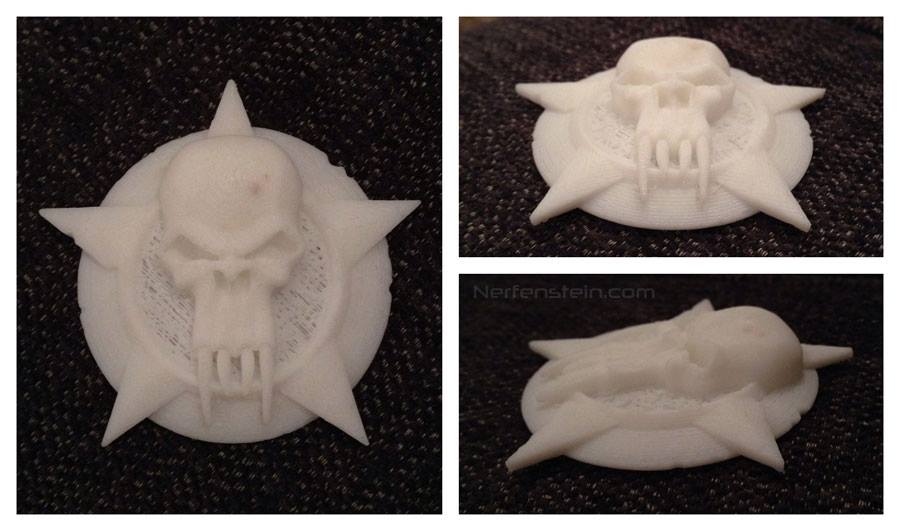 Up Plus 2 3D printer setup impressions
You know when companies make things look dead simple to set up and then you get it home and it’s like putting together an IKEA cabinet whilst wearing a space suit? Annoying, but that’s the opposite of setting up the Up Plus 2 3D printer. Everything went exactly as stated, a few EASY steps and it wasn’t only set up, it was printing a file. I cannot overstate how simple this was to set up, for the beginner just getting into 3D printing, the Up Plus 2 3D printer is a godsend. 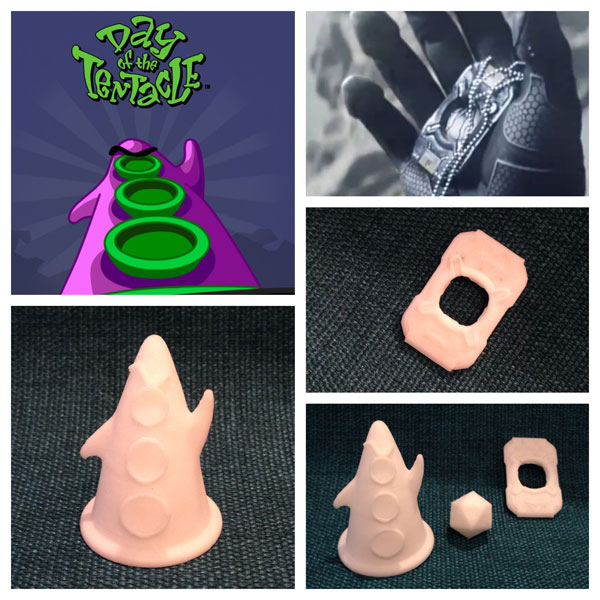 Up Plus 2 3D printer setup steps
Remove from box, take off packaging clips (that were cutely labeled I might add!). Plug in power, plug in auto leveler, turn it on, run the leveler, remove leveler, plug in auto level wire to base. Done! Download test file, follow a few steps in the software and print. Yes, it truly was that easy. 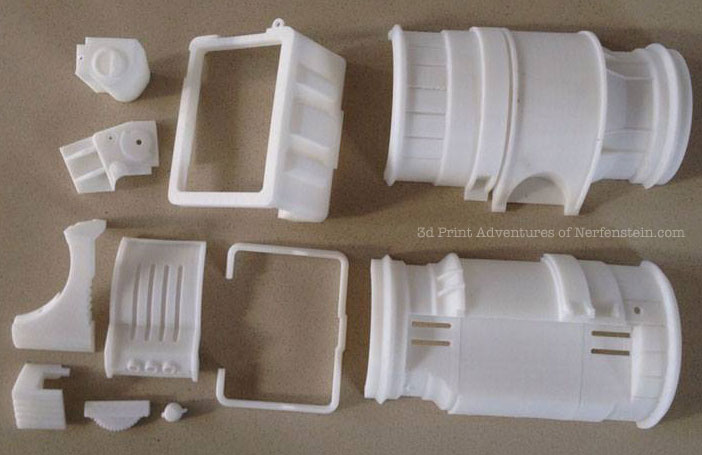 I’ve printed quite a few things so far, the smallest a table-top RPG dice and the largest a full-size Pip-Boy from videogame “Fallout” (above). I’ve noted even though the print quality is great for an entry level machine, it’s still shows the print lines clearly when priming for painting.

These are unfilled / unsanded objects, so you can clearly see the print lines. I actually liked how this looked for the Darkwatch badge (above) particularly.

The above files I simply downloaded from Thingiverse, loaded them into the software and printed them. It is still like magic to me.

Below you will see the first thing I’ve ever made from scratch and printed. It’s not great, but I’ve never seen / used 3d modeling software before.

That’s my 3d Print Adventure so far. You will no doubt see more 3d Print Adventures by me here at my blog in the 3d Printing section, or over at my Facebook Page. I hope you’ve enjoyed this little foray into someone’s adventure with technology who has never used it before and it sheds some light on how cool these machines are. Given 3d printing is still in relative infancy, think of what we have to look forward to in the future! 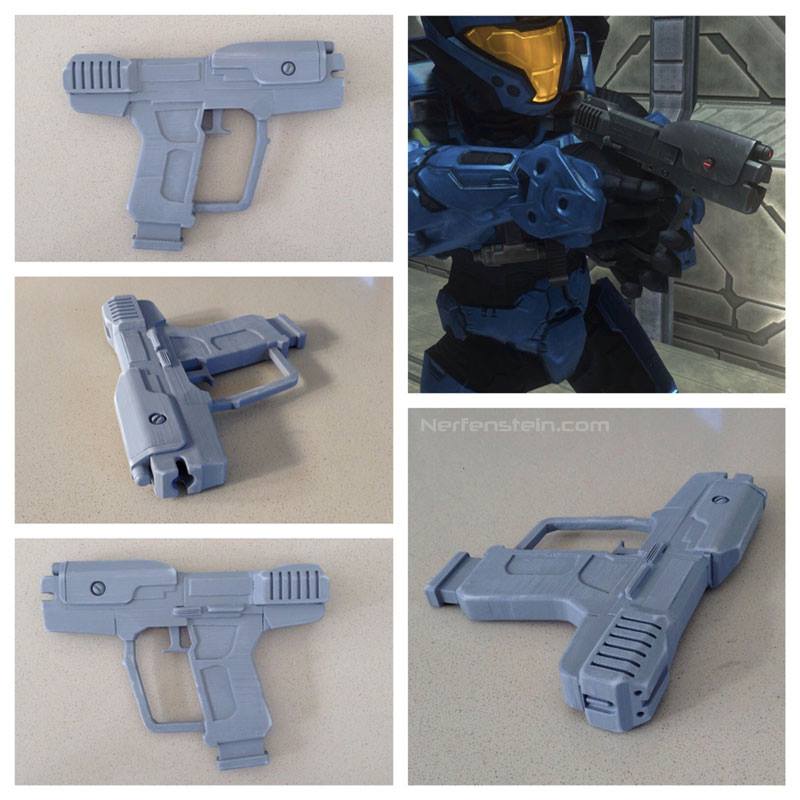 Below I leave you with some questions the lovely folks at my Nerfenstein Facebook page asked.

Nerfenstein Facebook Questions about 3d Printing:
Ian: Where can one go to find schematics for 3d printers? and are there programs one can use to make their own schematics without lots of technical know-how?
I answered this on my page explaining I’m a n00b and I’ve only really ventured to Thingiverse so far.

Matt: How the filament dries quick enough so that it doesn’t fall.. surely it has to be just hot enough to flow, but not that hot that it just flows almost freely.
The 3d printer builds little scaffolds around models that have any overhanging parts, these are easily removed once the print is finished.

Corax: [edited for space]: 1. How does the plastics of the printed item feel? 2. Is it sturdy? 3. Does it have print lines? 4. Methods for smoothing print lines? 5. Do you have 3d scanner / future? 6. Would you test Nerf part prints? 7. How do you print large items? 8. Was it quicker/slower than you expected when printing?
1 & 2. Feels good, solid and sturdy enough for my uses. 3. Yes, see images above. 4. The only one I have tried so far is bondo filling and sanding, there is also an acetone solution I haven’t yet tried. 5. No I don’t, of course I would like one, must win lotto ;p 6. I would if I had printed any. 7. They are slices into smaller parts (see Pip-Boy). 8. Slower.

MLD: A range of printers you considered, and what you went for and why! I want one but have NO idea what I need to look for etc.
As mentioned above I originally ordered a Cubify.. sounds like I dodged a bullet.

James: How much effort and money are required for upkeep?
So far… Cleaning the print plate after each printing (minutes) and no cost. New reels of plastic (around $60 each).

Dylan: Are you able to give me ten reasons to convince my girlfriend (who I live with etc) that buying a 3D printer is a good idea?
Ten? Hmm. Depends what your gf is into, for me.. Fallout, Halo, Borderlands, Zelda, Cuddling Owls, Bolt Gun Ammo, bunnies!, fun, magic, imagination kicker!

Matthew: how hard is it to design something to be able to print it?
Well it took me about 40 minutes to do that little plaque and I’ve never used a 3d modeling program before (though I am quite tech savvy I guess).

Stephen: For prop-making, what has the 3d printing made easier for you vs. what do you still prefer to do by hand?
It’s made things I wouldn’t usually make for myself easier (like the Pip-Boy). I’m yet to use it in conjunction with scratch built props. I do still prefer to make things by hand.

Mark: Can I print nerf stock/fore grips, etc?
If you had a model for them, you could easily do so.

Special thanks to Amelia at Combustible Props for her kind and much needed coercion / help. For another 3d printing write-up check out Amelia’s own adventures on her Flickr, Blog or Facebook page. Cool girl with some wicked props.