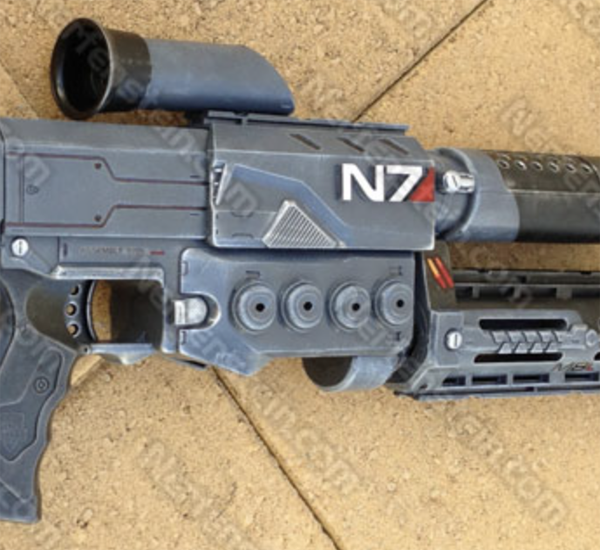 Hi funsters! Time for a new Nerf mod. I realize my Nerf mods may seem few and far between lately, but I certainly haven’t forgotten it was Nerf modding that got me into wanting to be a prop maker. The Nerf mods won’t stop and here is a new one for the Nerf fans out there. I took some photos as I was doing this, as I thought if anyone else wanted to give it a go this might make it easier than me rambling on, trying to explain. I’m pretty sure veteran Nerf folk will know straight away by looking at it what was done and how, but for those that might not, images! Let’s take a look at how the poor woman’s / man’s M8 Avenger Nerf mod was made.

First up the base of this mod is of course the Nerf Retaliator, which bears striking resemblance to the Nerf N-Strike Recon CS-6 with some sweet new attachments, most notably the sexy new stock (can a stock be sexy? I don’t know, but if one can, this is it). It was actually the stock of this gun that urged me to try an M8 Avenger mod (not in a voice in my head kind of way… honest), because of the shape and the non solid nature of it.

You will note that annoying ‘end cap’ (thanks Jon) sticks out further than the cool stock when you attach it, so let’s start by sawing that off and grabbing some styrene to fill the hole (just press the styrene agains the hole in the stock and draw around and and cut it until it fits, glue!). This gives a nice finish to the back end.

Next up you’ll need the sight for the top, for this I used a toy telescope cut down because I liked the shape of the eye-piece (yes I am that fussy when modding). You can use anything here, but keep in mind if you want it to have a slight M8 Avenger look, you may need to cut it up, so an expensive Nerf sight might be best kept for other things. As with the hole in the stock, I filled the hole in the front of the ‘sight’ with styrene and sanded it all neat like. 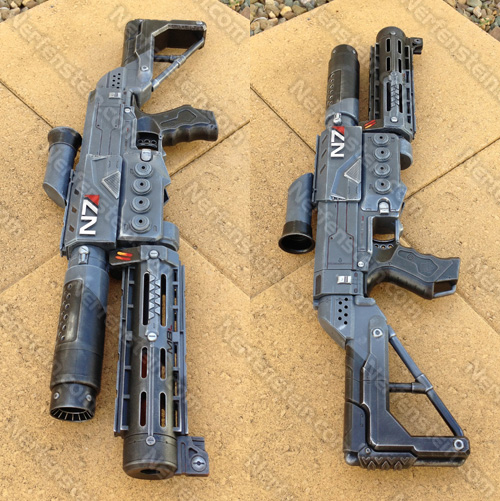 Front, you’ll see I’ve flipped the barrel extension that actually comes with the Nerf Retaliator upside down and attached it under the other barrel, which Nerf folk will recognize immediately as coming with the Nerf Spectre. I did this because I wanted the top barrel shorter than the under barrel, thus playing up to that M8 Avenger aesthetic once more. For those circle ‘button’ things I found awesome rubber caps in the hardware store, but anything circular that you can fit four per side will do the job. Oh and fill in the screw holes.

Once it had been hit with the undercoat and a couple more coats of black it was time to tape this puppy up. Taped in all areas that were to be left black, so the front part of both barrels, the grip and trigger, eyepiece of the sight and of course the stock. Ran all these to the overall build (i.e. if you look at the stock you will see it runs in line with the taped area so it isn’t jarring, likewise with both barrels and the grip). Sprayed it grey.

For the “N7” I used perspex laser cuts, so these are raised and look REALLY clean, incidentally I sell sets of these for $12AUD plus postage and the N7 on a black perspex backing with pin for $15AUD, cool for cosplay or everyday use. Just in case anyone wanted them for their own blasters. I’ve used them on a few now and they are real classy. 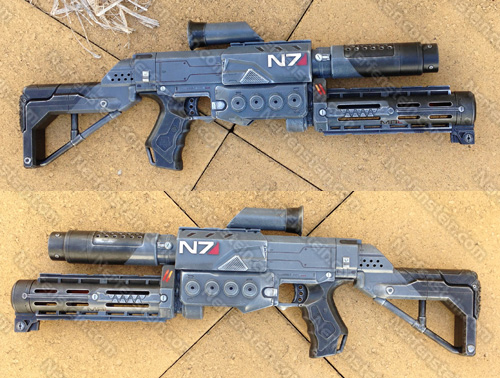 Once all the taping was done it’s time to hit the dry-brushing and detailing. I also threw in a few decals here and there, though you can’t really see them in the image, they look cool and add some more authenticity to the build overall.