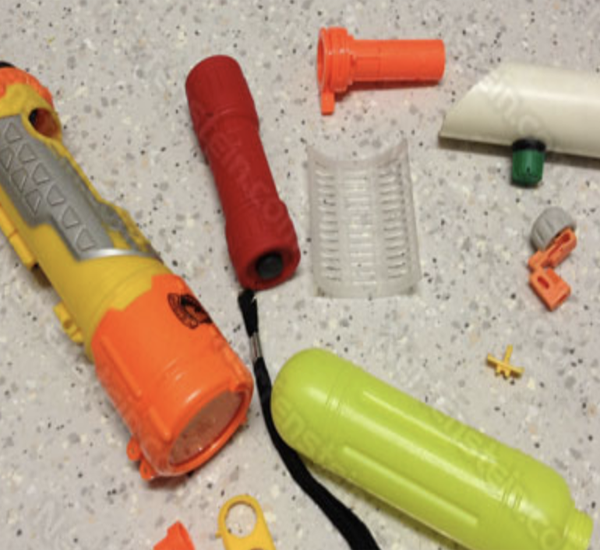 You guys and gals know I love putting a different spin on things right? I don’t think things in the Nerf modding world get much more weird than this… I bring you the Nerf Element Scope Lightsaber (or as the cool guys at The SciFi Show named it, the Nerfsaber).! Swoosh swoosh. I’m wanted in twelve systems just for wielding this thing! Why I even wrote a TV ginsu style ad right this minute for this thing.. .to be read aloud with annoying TV sales pitch voice! ….

“Going into a desolate bar with a no blasters rule NO PROBLEM! Found out the biggest bitch in the galaxy is your father? WHO CARES! The Nerf Element Scope Lightsaber brings a whole new meaning to HvZ and Nerf War badassdom. Pull it out and swoosh at all your friends and while they’re trying to figure out what the hell it is GINSU!! The Nerf Element Scope Lightsaber comes with not 3, not 2 but 1 amazing green LED fueled plasma coil, so you can swoosh it around in the dark and see green blurs for fun! The Nerf Element Tactical Scope Lightsaber features a fetching ‘N-Strike’ logo as well as other recognizable Nerf parts. Amaze your friends, slice through air! An elegant weapon for a more civilized age. Get yours today!”

This was a fairly easy build and loads of fun, so if you want to know how it was done I’m putting it here so you can build your own. Obviously you will need the Nerf Element EX-6 action kit, it comes with the Element Ex-6 pistol (you will need the main inner barrel section for this build), the tactical light (not needed) and the most important thing you will need, the tactical scope. Along with these you will need some other bits and pieces, though to be honest these can be any little Nerf bits you have laying around, so you can really personalise your own Nerfsaber. For this build I used a tactical rail catch clip and the plunger button from the Nerf Secret Strike. Non Nerf parts include part of a hair-roller (yes I know I do love them, they’re cheap and add great texture!), some PVC piping, part of the lens off a pair of toy binoculars and finally an irrigation button (from the gardening section of the hardware store) and the usual putty and glue you would use on other builds… oh and paint.. duh.. obviously. You will need to start by using a cutting tool (Dremel) to remove the bulky part housing the attachment area that slides onto the blaster, then sand that flat until the whole thing is nice and round, other than the rail section, which looks kind of cool.

That’s the main body of the Lightsaber / Nerfsaber done, I opted to add in a green LED to the internals so it looks wicked in lowlight. This was simply a green plastic bottle I happened to have from an old water pistol and a green bright LED light with switch. The bottle was like it was made to fit snuggly inside the tactical scope, so you can slide it in and out if need be, the LED setup is simply mounted into the bottle opening, you get to the switch by flipping open the tactical scope at the lightsaber’s base… sweet! 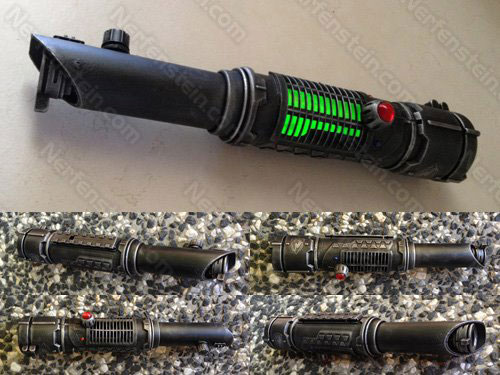 I’m adding pictures to illustrate the build, because trying to explain it can be a bit hit and miss. You can see the PVC was cut to a length that looked in proportion with a ‘real’ lightsaber, the end was carved into that nice angle, so when the Elements barrel was slotted in you could see the side of it where the PVC pipe is cut away. Oh yeah, to slot that in you will need to find something to brace it in there as it should look like it’s almost free floating at the ‘pointy end’. Once the tactical rail catch clip and irrigation button are attached to the PVC (the irrigation button has a handy spike, so this is not just drilled to the front of the PVC, but also through a drilled hole into the PVC for strength), you can now attach the PVC to the tactical scope, I used the toy binocular eyepiece as it was a PERFECT fit to hold snuggly into the tactical scope, with the tapered side holding the PVC pipe perfectly also, it was almost like these toys were meant to be used in conjunction with one another.

That’s it…. I hope this helps you in some way Star Wars Nerf fans.

This post was written for GirlyGamer.com.au that’s the blog of Ms. Nerfenstein. Join her.. err.. me over on Facebook, for more updates and blaster / prop fun!