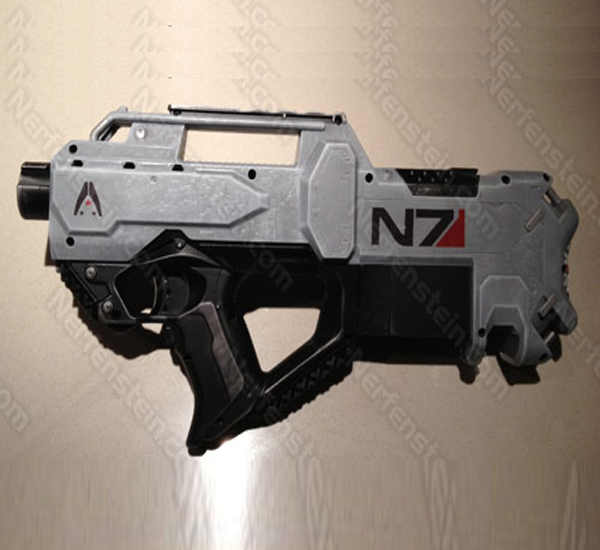 Something a little different today. I’ve put the finishing touches on my latest Nerf mod, a Rayven N7 Mass Effect protest mod, now that I’ve finished Mass Effect 3. If you follow video games at all you will probably know that the way Mass Effect 3 ended has caused uproar among fans of the franchise. I dedicate this mod to that uproar, something I both understand and support. If you’re playing Mass Effect 3 and haven’t finished it, the rest of this article will contain spoilers, as it is going to discuss my own reasons for being so utterly devastated with how things played out. If you’re not a gaming fan, you might want to read this anyway, to garner some insight into how video games can be just as powerful as other media, be it art, movies, theater or television. 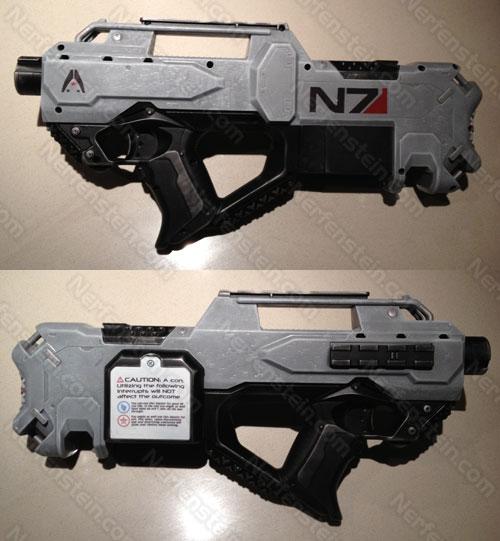 I invested over 40 hours in Mass Effect 3, I had waited over two years for its release and followed the development with some fervor. I’d already invested around another 100 hours in the first two games. I’d become attached to the characters, the stories, the places and mythos. In a word or two I was heavily invested. The hero of the piece Commander Shepard (male or female dependent on your preference) had sacrificed much and this was to be her big send off, her last hurrah (or last HOO-AH!), this was going to be epic.

CONTAINS SPOILERS
This is my opinion, though it seems to be an opinion shared with many around the globe who all feel betrayed by BioWare and how they let Mass Effect 3 end. The main outrage stems from the final 10 minutes or so, Shepard having made it to the final task is given 3 ‘choices’, though this is so ambiguous it’s hard to know exactly what they are and none of them are good. To add insult to injury the endings are then almost identical, regardless of the ‘choice’ you make.

There will be those naysayers who suggest people are unhappy because they didn’t get a ‘happy ending’, but that’s not the entire story. Sure I wanted my Shepard to get a happy ending, I wanted to see her alive and kicking back, having saved the galaxy AGAIN, I think she deserved at least that. Given the connections Shepard made in the game and romantic entanglements where promises were made and a future set out, I wanted some happy, sue me. That is only part of my issue with the Mass Effect 3 ending however. 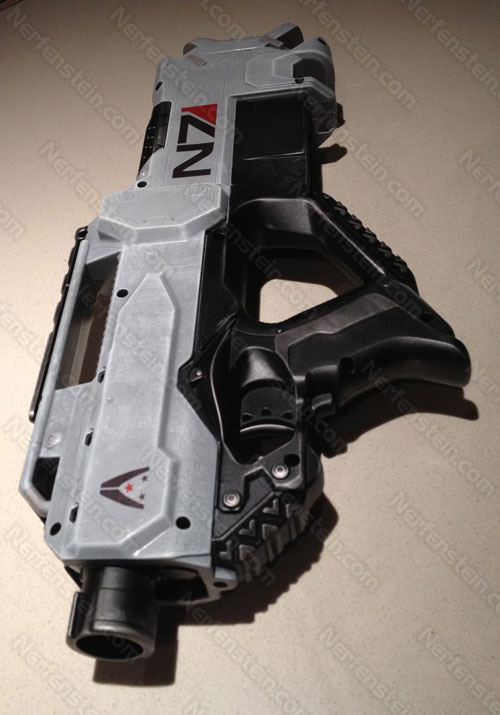 CONTAINS SPOILERS
My mind is a little fuzzy, but bare with. There are things at the end of Mass Effect 3 that make NO SENSE, and this is why people are annoyed also. So you see it isn’t all about the happy ending, it’s more than that. Firstly the game series has always relied heavily on a good / evil premise. Your Shepard can either make choices that are good (Paragon) or bad (Renegade). I always play Paragon and my rating was off the chart by the end of the game, but it didn’t mean anything, because the final moments actually FORCE the player to disregard everything and press that Renegade button, if you don’t, you die there and don’t even make the final push. LAME. 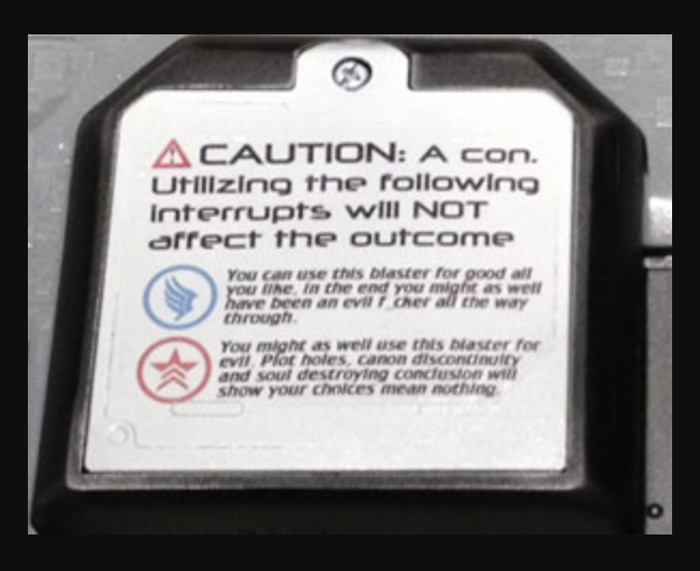 Other problems in those final moments….
How did Anderson make it up to the Citadel control area before you? Where the frack did the Illusive man appear from, what’s with the creepy kid AI, puhlease. The nonsense continues with a plotline so ridiculous it hurts, it turns out the Reapers are killing organic life because synthetic life will always turn on its creators (think Blade Runner, Battlestar Galactica, Terminator). So the Reapers are killing organic life, to stop the synthetics killing them… what? whaaaat? So a synthetic lifeform (Reapers) is killing the organic lifeforms to stop the synthetics they will create, from killing them… *brain mush*

Like BSG it’s suggested this happens in cycles, the organics make synthetics, the synthetics kill their masters, so every 50,000 years the Reapers / synthetics clean up most of the organic life, to stop that happening… you see the issue here I’m sure.

CONTAINS SPOILERS
Err Joker, Ash and everyone, why are you back on the Normandy in the Mass Relay, weren’t you on Earth with me moments before, in fact, weren’t some of you guys right by my side when that last assault happened and I almost died? Looks like you all were at the very least highly incapacitated, the ground was littered with bodies and I didn’t hear any of you asking if my bloodied mess was okay as I staggered forward. Yet you step out of the Normandy fresh as a daisy… Joker you fracking coward, clearly the guy with loyalty to me out the wazoo decided to flee the fight… AS IF!

Don’t get me started on the destruction of the Mass Relays, technology so massive in previous storylines it’s stated they take out the entire system if they exploded… nice one Shepard, you’ve killed billions. Well other than the Earth like planet Joker and co end up on, it’s fine.

Technology, Relays fracked… everyone is now stuck on or around Earth. STUPID. Well that’s going to be interesting.

CONTAINS SPOILERS
It all goes out the window. Despite the build up in almost every press release suggesting all your actions will culminate in those final moments, we were duped, it all means nothing. Make sure you shoot the illusive man, there’s no option to talk him down, to make a run at him, your choice is removed and you’re forced into a corner. This goes against the ENTIRE game, which is based on choice mechanisms. Add to this that in large part we learn all about free-will and how life is defined (in large manner due to your interactions with EDI) it’s ironic you have no free-will in those final moments.

CONTAINS SPOILERS
You fight for 40+ hours, you die (even in the best possible outcome you’re fracked) and then you’re met with a jaunty little message pushing DLC and multiplayer. Hey guess what BioWare, I’m devastated, but thanks for pushing for more money. I felt utterly cheated. And the little add-on movie after the credits (credits you sit through in a complete daze) of a grandfather telling a little kid about how Shepard became a legend… BITE ME BIOWARE.

There is now a global push for BioWare to release DLC featuring a new ending, if this happens it will be a game changer, literally and figuratively. It astounds me the play-testers never brought up these issues prior to the game going gold (complete), but the idea of getting a new ending via protest is really interesting.

BioWare is a fantastic company with fantastic games and it saddens me greatly they completely dropped the ball on this, but it isn’t over till it’s over (it could all be one big con in the sense of it being a campaign in marketing genius, they get all of us fired up, then Bobby Ewing steps out of the shower and the whole thing was a dream).

Whatever the case, here’s hoping they listen to the fans and they aren’t mired by publisher EA who are only interested in a money making push rather than integrity and a fitting end to such an amazing franchise.

About that movement to get a new ending to Mass Effect 3. They haven’t set up their main website as yet (at time of writing), but their Facebook campaign is well on the way over at Demand a Better Ending the RetakeMassEffect page. You can also keep up with the movement via Twitter @RetakeME3