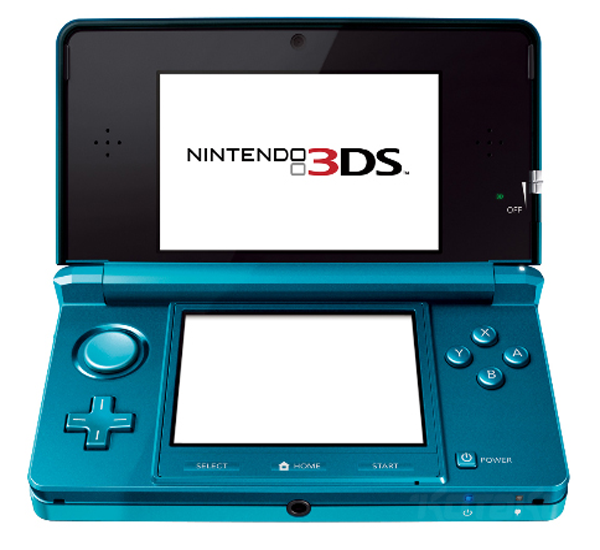 Nintendo, the word rings in the brain and dings childhood, games, fun and of course Mario. To a fairly large extent Nintendo have helped define video games. Unlike the other video games companies, Nintendo specialize in gaming, it’s their forte and always has been, all the way back to when they released playing cards, before the digital revolution.

The downside of Nintendo over the last 20 or so years has been its ability to rehash the same device. Who else had a Game Boy grey, Game Boy Pocket, Game Boy Color, Game Boy Advance, and Game Boy Advance SP? I dodged the Game Boy Micro (2005), purchasing a Nintendo DS that year instead (the original ‘fat’ Nintendo DS). I then purchased a DS Lite on release, but had no interest in the DSi and DSXL. Ahh Nintendo, your ability to repackage the same thing, maybe adding one or two new features, thus making people want it, is only bettered by Apple. 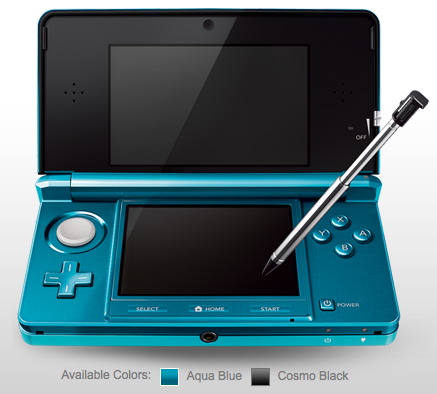 Enter the Nintendo 3DS
The Nintendo 3DS is Nintendo’s new bad girl on the block. This isn’t just another incarnation in the Nintendo DS lineup, this is actually a genuine step-up technically and perhaps even philosophically.

What is the 3DS?
The 3DS is the next-generation of the Nintendo DS handheld gaming unit. It is presently available in black and blue (expect loads more colors in the future, this is Nintendo after all). It weighs around 230 grams (8.1 oz) and features a 2GB SD Card (comes with it), camera, 3D display, accelerometer, 3-axis gyroscope, wi-fi, D-Pad and a sweet flat analogue-stick. The camera features one 2D front facing and 2 x 3D rear facing sensors, of fairly dubious quality at 0.3mp. Again, this being Nintendo, we may expect a better camera at some point.

The controls and display are where things really crank up. The display is now Autosteroscopic or “glasses-free 3D”. With this function turned on (you can disable it) it is like looking into a little box, that is to say the action takes place behind the screen and not above (holographic displays are some way off). Now you might be thinking ‘GIMMICK!’, which is what I initially thought, but no. The 3D is a significant step-up and I can’t wait to see what this means for the future of gaming.

Inbuilt 3DS Games
The 3DS also comes with built in titles for you to play, just to give you a peek at what the device can do. “Face Raiders” is a 3D augmented reality ‘game’ that sees you taking a photo of yourself with the camera and shooting the floating heads in whatever room you happen to be in. You can also snap 3D photos and mess about with the augmented reality cards that come packaged with the device. The AR game cards essentially see you placing one (or more) of the cards on a flat surface (in these images it is my kitchen counter with various paraphernalia left in for effect), aim the 3DS camera at the card and it springs to life on screen (the first time you do this, you may even *squee a little). You then do whatever is asked of you, shooting a dragon that appears from within your table / counter top / desk, or just drawing things of your own design and scooting them over the surface. These don’t have a lot of depth (game wise, graphically they’re full on 3D, it’s a shame the image you’re seeing isn’t doing it justice), they’re more about instant gratification and ‘wow factor’ than they are about full on gaming. Still, they’re a great addition and let us assume Nintendo will release more of these AR cards in the future.

*a ‘squee’, not quite a full on squeal of delight, but almost. 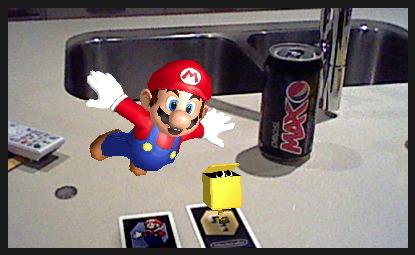 Inbuilt non-games
As well as augmented-reality fun, the 3DS also comes with a built in voice recorder (fairly filmy with basic pitch changing software), Mii-maker (yes your Mii lives on your 3DS and can visit others via Street Pass and vice-versa). There’s an Activity Log (in case you want to check back at what you’ve been doing). Lastly there’s also a pedometer, parental controls and it plays music off the SD card, provided it’s AAC files with .m4a, .mp4, and .3gp extensions, or MP3 files with .mp3 extensions… oh and they can’t be copy protected.

As far as handheld gaming goes I’ve got them all and the iPhone had truly damaged my DS usage. Now though the 3DS is such a significant step up I’ve even found myself wanting to revisit my old DS titles (there’s no difference, it was just a compunction). As for negatives against the 3DS, some people have allegedly reported severe headaches. I can’t say I’ve had ANY issues, headaches, blurred vision or otherwise. The main negative against the 3DS I’ve found is that you need to keep the device fairly still whilst playing to keep the 3D clear and visible. This can be difficult in some games and can make you lose track of where you are. Also having an accelerometer is cool and all, but coupled with having to view the screen from a fairly small ‘sweet spot’ to keep the 3D clear kind of negates just how useful this is. Oh let’s talk about the battery life, it’s not great. Mine has been running out with full use in about 4 hours, not even long enough for a short plane journey. I just sit mine in the charging dock (it comes with) whenever it’s not in my hands and for in-house play, the battery – though lame – hasn’t been a problem. Lastly and probably the most painful negative, 3DS games are region locked. Unlike DS titles that were region-free, 3DS games are locked to the region. This means no importing games, which royally sucks.

Overall I love my 3DS, sure it’s not perfect, but it’s great to see Nintendo once again innovating in ways the others have failed to do. Give it a few years and we’ll be seeing these displays all over the place. For now though this is a great introduction to handheld 3D gaming. 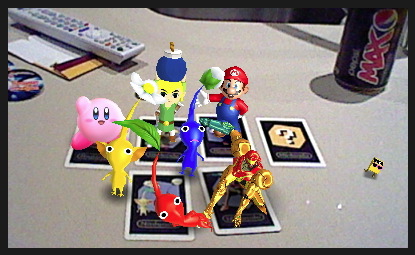 Price disparity woes for the Australian 3DS consumer
I just wanted to add this in as an Australian gamer and because it may be of interest to non-Aussie folk who moan about prices.

The RRP of the 3DS in Australia is $349 AUD which at present is $362 USD. In the U.S. it costs $250 USD. As you can see this means Australian consumers are being sporked by Nintendo an additional $112 USD for the same device.

Here’s a little breakdown for you as to why Australian gamers aren’t overly happy at the moment. These are based on present recommended retail prices for 3DS games in both the U.S. and Australia (both via EB Games):

This is essentially the pattern for ALL Nintendo 3DS titles at present, in the U.S. they’re $39.99 and in Australia the same title is either $68.00 or $78.00 dependent on if it is seen as a AAA release. As you can see that means Australian gamers are being charged $70-80 USD for a game that costs $40 in the U.S. It’s truly depressing (and yes I am aware the conversion rate at present is high, but even if it was what it usually is, it would still be extortion.

This Nintendo 3DS review and thoughts was written for girlygamer.com.au and was sent forth to posterous and tumblr automatically by tiny hamsters that work behind the scenes. Girlygamer neglects those poor sites in favor of her own corner of the web realm, so if you feel the urge to leave a comment (and why wouldn’t you?) make sure you leave it at girlygamer.com.au or it will never be seen by the writer and by ‘the writer’ I mean me.

3 thoughts on “The Nintendo 3DS review and general thoughts”