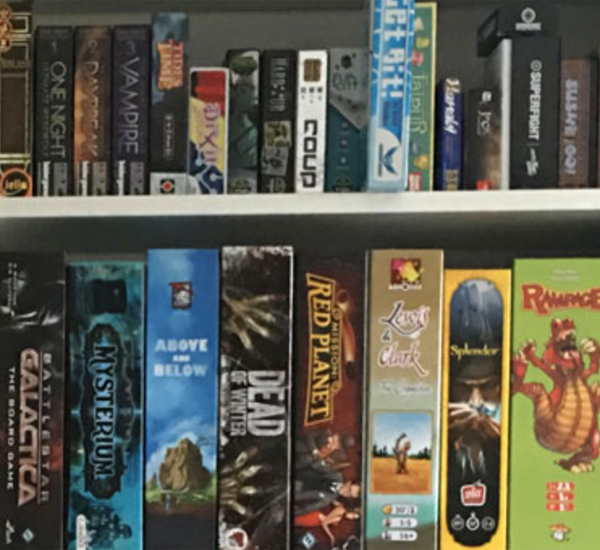 Just a quick wee note, there is an actual Nerfenstein update at the bottom of this post explaining a few things, if you have no interest in tabletop / board games and just want to know where the heck my site was, I understand (since my site is usually about prop making and Nerf modding). Just scroll down and look for the UPDATE section. Now onto this post, which was actually written months ago:

I’m updating this article which was originally written many years ago for my old website. I’m leaving parts of the old article in italics and updating underneath. I know it’s not Nerf or props, but I hope you’ll find it interesting regardless.

I’ve been tabletop gaming since the 70’s
Whenever board gaming comes up in social situations I’m at, I usually hear Monopoly, Scrabble or Cluedo (Clue) get a mention. Anyone else who is into modern tabletop / board gaming has no doubt had this happen to them at some point. They also no doubt know the immediate urge that follows, wherein you want to let them know there’s far more to the hobby than those classic titles. I thought I’d add this post to my blog on the off chance you’ve wondered about the board game / tabletop game hobby yourself, or, maybe you didn’t even know it existed and this might open your peepers.

Since writing that I’ve become more heavily involved in getting word out about tabletop gaming in Australia (and according to webstats, all around the world). I’ve been made editor-in-chief at Gameapalooza Australia, a tabletop gaming site. It’s our hope that we will alert more people to the hobby and also keep those already in the hobby up to date with not only worldwide tabletop game news, but also Australian based tabletop / board game news. We also make a point of covering Australian designers / publishers and events.

So when did I get into tabletop gaming? I’ve always loved gaming, it was my escape as a child. When Dungeons & Dragons hit I was all in, Traveller, Chivalry & Sorcery, RuneQuest, Tunnels & Trolls, Gamma World, Space Opera, Bushido and so many more. I played them all as each released and for many years afterward. These were swiftly followed by later games like Call of Cthulhu, Twilight 2000, Other Suns, Top Secret, James Bond, MERP, Paranoia and the list goes on. If there was a tabletop RPG released in the 70’s or 80’s I’ve probably played it.

The role-playing club I was a member of was held straight after the tractics club finished up, so turning up early meant you could give that a whirl too. That club also played Car Wars, OGRE, Wizard’s Quest, Cosmic Encounter, Risk, Survive, Axis & Allies, and other tactical and early euro tabletop games I adored. I would get up early and ride my bike many miles to play and if my bike happened to have a puncture I would rollerskate from outside of the city I lived in, all the way to the city center, just to play games.
Wow memories, back when some games came with tiny chits and some of the ‘boards’ were fold out paper. Some of those games may look rubbish now, but they were pure joy at the time. When I look at the games I play regularly now and think back to those older games, the only thing that’s really changed is the overall look of the things, better boxes, flashy artwork, expanded ideas, different components and the rate of which they release new ones, but still the same joy in cardboard.

Though I never stopped tabletop role-playing, I did stop board gaming for quite a chunk of time. I actually have my lovely son-in-law to thank for getting me back into board gaming. He has a huge collection of games and I would often peruse them. I’d think fondly back, but never wanted to encroach and be that weird mom who plays games with her son-in-law and all his friends (although I know he wouldn’t mind). Despite my trepidation I was invited a few years ago and re-found the love for the hobby on that very first game. I really can’t thank him enough for that and it’s been wonderful to share that love and talk about it with him. It’s funny, getting older, back in the day I’d have been great friends with someone like my son-in-law and it wouldn’t have been odd at all, we are great friends of course, but I would certainly stick out like a sore thumb at the gaming nights he attends lol.

And therein lay both the bliss and problem of tabletop gaming. To take part in the hobby you need to be present. It’s not as easy as putting on a headset and playing with someone miles away. The other problem is it’s not a solitary venture (though there are many games you can play alone) so those people you’re playing with need to essentially live nearby. I’m lucky because my partner is amazing and will play games with me, despite not being as into the hobby as I am.

Tabletop games these days are a far bigger business than they were back in the day. Geek culture used to be this tiny niche thing, but it’s now become a huge booming business and board gaming / tabletop gaming is swiftly becoming more and more popular.

This is both amazing and ugh. It’s amazing because the more people playing tabletop board games the better, because they are FUN and everyone should have more fun. Why ugh? Because magic, some of the magic is lost forever. There was something kind of special about being into something so niche it was kind of weird at the time. Because it was ‘weird’ and tiny, it also meant the people involved in it were always super enthusiastic and – I found – always kind, always. The more people that become involved in something, the more you get the trolls and sadly, though tabletop gaming is – for the most part – full of AMAZING people who are kind and non pretentious, you do get trolls and the internet of course makes it easy for these negative nellies to spread that darkness.

UPDATE JANUARY 4, 2016
Well what a nightmare. I wrote this post months ago, but thanks to my hosting company, my website went down and they were ZERO help in getting it back up and running. I actually thought I’d lost everything here, but whew, still here. Anyway that’s why this post is late and that’s why there’s a huge gap in posts here at my blog.

Re the tabletop gaming, I’m still editor-in-chief at Gameapalooza Australia. We’re actually looking for guest writers, so if you love tabletop games and fancy getting your voice out there, contact me, or go to Gameapalooza and use the contact form.

I’m still loving the tabletop / board gaming and sure, it has dented my time with Nerf modding and prop making, but I haven’t stopped those things by any means and I am hoping to streamline things this year with more props and mods, a better storefront and cheaper prices for people wanting things.

The only thing that might change here is I ‘might’ post more personal blog posts this year, about hobbies / things outside of Nerf modding and prop making, most notably some tabletop stuff, maybe, will see how it goes.

How does that sound fine folks? Hopefully it’s all good with you guys.
Take care and here’s to a happy / healthy 2016.