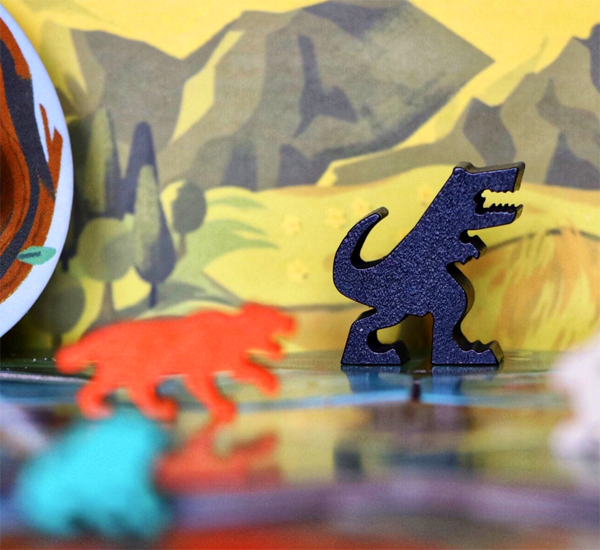 Hello fellow board gamer! Today, I am doing a quick written review of new Pandasaurus title Gods Love Dinosaurs. What a strange name you may well be thinking, well here’s the skinny. We’re talking Gods – the players – overseeing the food chain on a world, ensuring the dinosaurs you love have enough food to breed, just not overbreed. This food chain thing is a clever balancing act.

in Gods Love Dinosaurs 2-5 players battle it out over 30-45 minutes, taking a tile, placing it in your own ecosystem and doing certain actions. If there’s an animal on the tile, woo, you scored some wildlife. If the last tile in a tile row is taken, animal activations occur and it’s time for that particular animal to breed. This spreads that animal to a nearby tile of a specific type. If a predator activates, you guessed it, it wants some dinner and will eat certain things dependent on placement. Now if the dinosaur happens to be in the activation column also, it activates, meaning breeding and / or eating, and they will eat whatever they can find, because they’re dinosaurs. Just make sure there’s a place for them to go, you don’t want starving dinosaurs, because they die!

The simplicity of Gods Love Dinosaurs’ design is really nice. If you’re into big heavy titles, it may not be for you (I do suggest not overlooking another Pandasaurs title Dinosaur Island if you’re looking for something heavier, it’s awesome). Here we are looking at a game that can be played with families and newbies, mixed with veteran gamers and I think that’s a good thing. Sure there’s not a whole lot to the gameplay overall, but the choices you have still come with a lot of consequences if you screw it up. Poor dead dinosaurs.

Components
Gods Love Dinosaurs comes to us from Pandaaurus Games and – as usual – it’s a lovely production. Components are great quality, with some well cut adorable little animal meeples of differing colors (though the eagle is questionable). Tiles are a nice thickness, as is the main board and smaller boards. Overall, it’s another quality production from Pandasaurus.

Overall
I’ve enjoyed the few games of Gods Love Dinosaurs I’ve played so far. Each time e’ve play it, the players have taken on new little nuances with the way it all works. I have no issue with saying gamers should check this one out, though I would probably say it’s a play before you buy.

In Gods Love Dinosaurs, a cheeky, wild, and timeless take on the scientific tale as old as life itself, you are a god who has been tasked with designing an ecosystem with a sustainable food chain of predator and prey animals. But you just love dinosaurs, so all you really want to do is to make as many of them as possible!